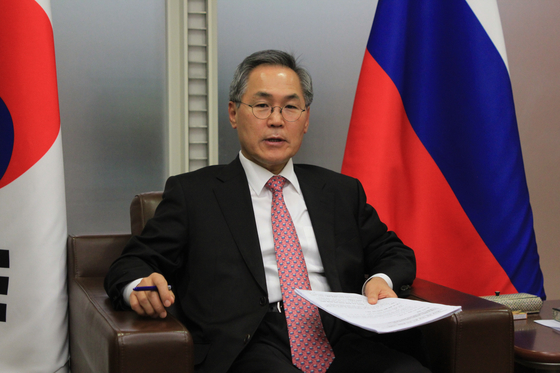 
Woo Yoon-keun, who served as Korea’s ambassador to Russia from 2017 to 2019, will depart for the country as a special envoy on Sunday and return Saturday, Blue House spokesman Kang Min-seok said Friday.

During his trip, Woo will meet with senior officials in the Russian government and parliament, while promoting Moon’s intention to advance bilateral ties, Kang said. A professor emeritus at Dankook University, Woo is not currently a government employee.

Plans for high-level trips between the two countries will be discussed, Kang added. President Vladimir Putin was scheduled to visit Korea this year, but his trip was delayed due to the Covid-19 pandemic.

Moon and Putin had a phone talk in September, and Woo will talk with Russian officials about follow-up measures. A wide range of issues concerning bilateral cooperation regarding Covid-19 responses, advanced technologies, medical tourism and the oil, gas and shipbuilding industries were discussed by Moon and Putin.

Woo will also ask Russia to play a constructive role toward the goal of achieving denuclearization of the Korean Peninsula and the establishment of permanent peace, Kang said.

Woo, a former three-term lawmaker, is a close political ally of Moon. He was the floor leader of the ruling party in 2015, when Moon was its chairman. He also co-chaired Moon’s first presidential campaign in 2012.

Speculation has grown that he will be appointed as Moon's next chief of staff. Noh Young-min, the current chief of staff, has been serving in that post since January 2019.

Woo’s wife is reportedly close to Moon’s wife, Kim Jung-sook. Earlier this month, a local newspaper reported that Kim recently met with Woo’s wife and delivered the offer that Woo serve as the next presidential chief of staff. The Blue House flatly denied the report and said there was no such meeting.