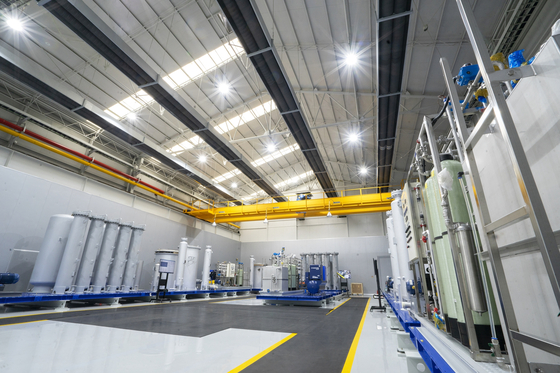 The plant is located on 2,000 square meters (0.5 acres) of land inside Hyundai Rotem’s Euiwang research center in Gyeonggi, which was formerly used as a production site for auto parts.

Hydrogen charging stations can largely be classified into two types: Ones that receive a direct input of high-purity hydrogen and ones that can extract hydrogen from natural gas before pumping it into vehicles.

Hyundai’s extractors would be used for the latter, which the company says has the advantage of being able to produce hydrogen in city centers, rather than transporting it from large-scale generators which are mostly located in more rural areas.

The Euiwang facility has an annual capacity of 20 hydrogen extractors, which in total can produce up to 4,700 tons of hydrogen a year. This is equivalent to fully charging 850,000 Hyundai Motor Nexo electric vehicles.

The first batch of extractors produced from next year will be supplied to Chungju in North Chungcheong, and Samcheok, Gangwon.

Hyundai Rotem stressed that 80 percent of the components in its extractors are domestically made — an achievement considering that in the company’s early days developing the product, most of the components were imported from Japan. Hyundai worked with around 35 domestic companies to localize parts.

The company aims to push this figure further by March next year, when it hopes to source all components from Korea, apart from the catalyst.

“At that point, we’ll be able to save costs by more than 15 percent and ensure a stable supply of parts for maintenance and repairs — that would gives us a big advantage in the hydrogen infrastructure market,” Hyundai Rotem said in a statement.

A Hyundai Motor Group affiliate in railway, defense systems and plants, Hyundai Rotem has been looking to develop hydrogen infrastructure-related products as a new growth engine. The business largely falls under the plant and machinery division.

Hydrogen extractors will be the first product in the hydrogen infrastructure portfolio, which the company plans to expand to compressors and dispensers in the future.