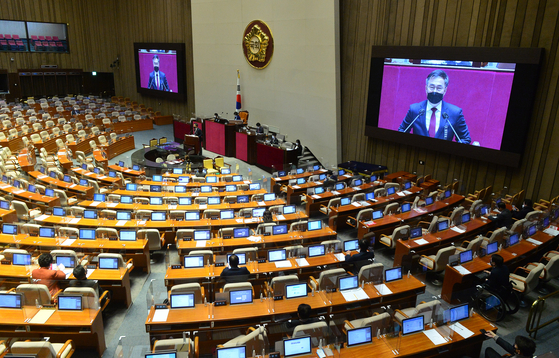 An opposition lawmaker of the People Power Party speaks during a continuing filibuster debate at the National Assembly Monday to block the passage of a bill banning the spread of propaganda leaflets into North Korea. The ruling Democratic Party is expected to end the filibuster with its majority Monday evening and pass the bill. [YONHAP]


A U.S. congressman on Friday denounced South Korea’s ruling Democratic Party (DP) for its ongoing attempt to ban the distribution of propaganda leaflets to North Korea, threatening to hold a hearing into what he claimed was a growing erosion of civil liberties in Seoul.

Rep. Chris Smith, a Republican from New Jersey, joined a growing chorus of international voices thumping the Moon Jae-in administration for sponsoring a bill that forbids domestic activists from sending leaflets across the border into the North.

As of press time Monday, opposition lawmakers from the People Power Party continued a filibuster debate at the National Assembly to protest the bill, though it was expected the DP would use its legislative majority in the evening to end the debate and vote to pass the legislation.

In its current form, the bill stipulates a maximum prison sentence of up to three years, or a fine of 30 million won ($27,000) or less, for spreading items like leaflets, printouts or electronic devices near the inter-Korean border.

Smith accused the Moon government of showing “undue acquiescence” to the regime in Pyongyang with the bill, which he characterized as “inane legislation criminalizing humanitarian outreach” to the North.

“In the event that [DP legislators] pass such a law, I call upon our State Department to critically re-evaluate the Republic of Korea’s commitment to democratic values in its annual human rights report, as well as in its report on international religious freedom,” Smith said, according to a statement uploaded to his website.

“It may very well be that we will see South Korea put on a watch list, which would be a very sad development indeed.”

Seoul’s Ministry of Unification — the South’s top inter-Korean agency — rebutted the claim Monday, with a senior official saying the bill was the “least of efforts to defend the lives and safety of our people living near the border.”

Behind the DP’s drive to ban propaganda leaflets is a hope that the legislation, called the “Inter-Korean Relations Improvement Act,” can help assuage Pyongyang and prod it to resume dialogue with Seoul.

Earlier this year, two activist groups run by North Korean defectors in the South flew leaflets across the border into the North through balloons, an act which triggered Pyongyang’s condemning of Seoul for failing to restrain such activities.

Using the leaflets as a pretext amid an extended stalemate in denuclearization talks, the North in June unilaterally demolished the inter-Korean liaison office in Kaesong without prior warning, shortly after severing official communications with the South.

The main opposition People Power Party (PPP) has seized on the opportunity to trumpet its favorite label for the DP, calling the ruling party and the administration appeasers of North Korea. Particularly notable have been the prominence of the PPP’s two North Korean defector lawmakers, Rep. Thae Yong-ho and Ji Seong-ho, who have been leading a public opinion campaign to sway foreign actors to their cause in opposition to the bill.

The DP’s own actions have not helped the party shed accusations of appeasement. Rep. Song Young-gil, head of the National Assembly’s Foreign Affairs Committee, controversially remarked during the filibuster debate on Monday that it was not logical for the United States to tell North Korea not to arm itself with nuclear arms when it had 5,000 nuclear weapons of its own.