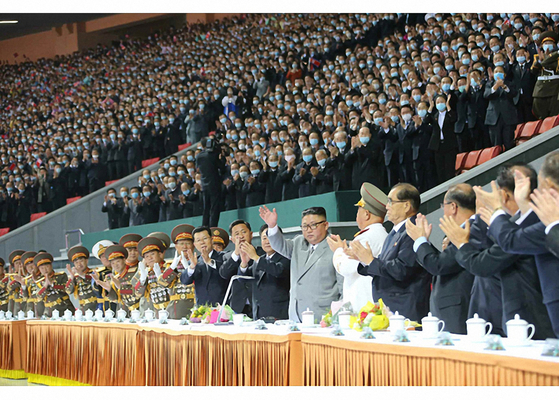 On Saturday, the North celebrated the 75th anniversary of its ruling Workers’ Party with an immense military parade that was topped off with the display of what could be the world’s biggest mobile ICBM, as well as a new submarine-launched ballistic missile.

The new hardware was just one of the surprises Pyongyang had in store that day. The other was Kim’s unusually emotive speech, during which he admitted failures, teared up multiple times, and even extended a “warm wish” and an apparent hope for reconciliation with an estranged South Korea.

Such remarks elicited surprise in Seoul after months of hostile rhetoric and actions, including the killing of a South Korean fisheries official in the North’s waters last month.

In a party meeting on Monday, the chairman of South Korea’s ruling Democratic Party (DP), Rep. Lee Nak-yon appeared to embody mixed feelings as he expressed concern at the North’s unbending will to expand its missile program, but welcomed Kim’s apparent call to “take each other’s hand again.”

DP Rep. Shin Dong-kun followed suit, calling on opposition parties to lend support to the Moon Jae-in administration’s dogged pursuit of a formal declaration to end the 1950-53 Korean War as a means to revive diplomacy with the North.

“Chairman Kim expressed warmth towards his countrymen in the south — a remark that elevates hope that the time for inter-Korean cooperation may arrive with the end of the coronavirus,” wrote DP Rep. Song Young-gil, chair of the National Assembly’s Foreign Affairs and Unification Committee, on Facebook. “I rate [the comment] positively.”

The main opposition People Power Party (PPP) by contrast seized on the North’s parade over the weekend to double down on its attacks on the Moon government, labeling the president’s push for an end-of-war declaration as futile and hazardous to South Korean security.

Kim Chong-in, the PPP’s interim chairman, said in a meeting Monday he felt horror at Kim’s “crocodile tears” in expressing goodwill toward the South after the shooting of the South Korean last month.

“North Korea unveiled not only a more advanced ICBM but also new artillery that directly threatens South Korea,” Kim Chong-in said. “[North Korea] has not changed, and the threat it poses has only gotten greater.”

Analysts remain uncertain as to the motives behind Kim's goodwill remarks toward the South, but some thought the regime could be keeping the door open to future exchanges with Seoul depending on the outcome of next month’s presidential election in the United States.

Since denuclearization talks faltered with Washington last year, the North has vented its frustrations at the South through various provocations while condemning Seoul for keeping in line with the U.S.-led sanctions policy toward Pyongyang.

But with its economy in shambles due to the coronavirus and multiple natural disasters in addition to the shortages caused by sanctions, the North has experienced more strain on its regime than ever before, as testified by Kim’s surprising admission of failure in his speech on Saturday.

The parade and festivities, as well the mass games that Kim watched with his top cadres in Pyongyang on Sunday, are designed to shore up internal unity and mobilize the masses in desperate times, analysts say.

The massive workforce the regime mobilized for the Workers’ Party anniversary celebrations may be put to continuous use in state projects until the end of the 80-day economic “battle” Kim announced last week — an apparent last-ditch effort to eke out some results in the remainder of the country’s disastrous year.