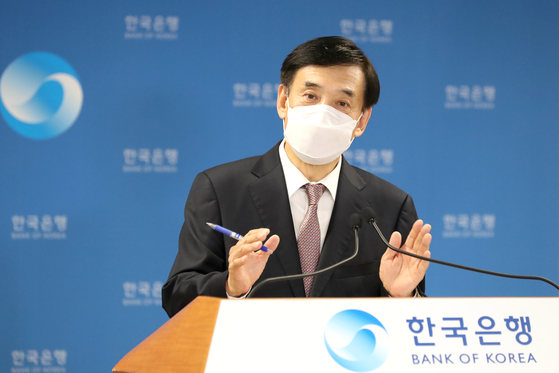 
Bank of Korea Gov. Lee Ju-yeol said it is inevitable for the bank to maintain an accommodative monetary policy for now considering the slow growth in consumer prices affected by the resurgence of the coronavirus pandemic, but that it will maintain a 2-percent inflation target.

Consumer prices through November inched up by 0.5 percent year-on-year, extending a slow growth trend in the mid-zero percent range that it has held since last year.

"Growth of consumer prices this year greatly fell short of our target of 2 percent," Lee said during an online press conference held Thursday. "It was mainly due to the economic downturn brought on by the Covid-19 outbreak especially in the services sector...as well as government's welfare policies, such as expansion of free education for high school students and one-off phone bill support given out to households."

"But the government and the central bank have decided to still keep our target inflation rate at 2 percent for now," Lee added.

According to the bank's chief, it decided a target change now could bring more uncertainties to the economy, and there is still a possibility the inflation rate may near the target if the economy recovers with the provision of vaccines.

Lee admitted though that reaching the target may take some time.

"We can't tell exactly when we will be able to reach the 2-percent inflation target, however, we are expecting around 1 percent next year and mid-1 percent the following year," he said. "But it really depends on the effect of the Covid-19 pandemic."

While it has been inevitable for the bank to go with an accommodative fiscal policy to stimulate the economy, Lee said the effects of the fiscal policy on inflation have weakened lately due to various factors including the aging population and growing market uncertainties.

For instance, property prices rose on low rates but this did not translate to economic growth.

"In the past, we could look forward to a so-called wealth effect when asset prices soar, but now people are saving [money] against market uncertainties," Lee said, adding the gap between asset prices and the real economy has led to serious financial inequality and a sluggish economic recovery.

"We are reviewing ways to improve our fiscal policy by monitoring policy changes at other central banks," Lee said.

On recent government comments that the low interest rate has brought on a rise in the price of jeonse lump-sum deposits, Lee rebutted saying house prices basically are affected by various factors other than interest rates, including government's policies and housing supply.

"Jeonse prices have been rising steeply...from about June, but low interest rates have been in place for some time from before June," Lee said. "I don't think the interest rate is the main driver."

In response to a question on whether an end to the Covid-19 pandemic would bring about serous inflation, Lee said he doesn't think so.

"There are conflicting views on this...but personally I don't think it's likely that the end of the [pandemic] would immediately lead to inflation like in the past...as there will be great political and economic uncertainties after the pandemic," Lee said.