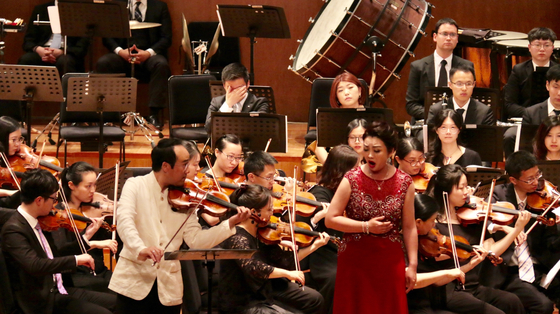 South Korean violinist Won Hyung-joon, left, and North Korean soprano Kim Song-mi perform together at the Shanghai Oriental Art Center last May in Shanghai. It is known to be the first joint performance between North Korean and South Korean classical musicians. [WON HYUNG-JOON]


For musicians, there’s no doubt in the power of music.

It exists not merely to entertain the ears of the listeners but to heal people, connect people, bring people together, create empathy and for such reasons, can even be used for diplomacy to help ease tensions between countries that are hostile toward each other.

With an unyielding belief that music can bring peace between two countries that share the same land but are divided by the world’s most heavily fortified border, violinist Won Hyung-joon, 44, has been making efforts for a decade to hold a joint performance between South and North Korean musicians.

During the past 10 years, Won faced countless frustrations and last-minute cancelations due to heightening tensions between the North and South following various provocations by the North which took place, “of all occasions, a few weeks or even days before the scheduled concert,” according to Won. But finally, in 2019, exactly 10 years after he founded the project orchestra Lindenbaum for the joint performance, the 44-year-old violinist’s dream was realized — though only partially.

On May 12, 2019, Won was able to perform together with North Korean soprano Kim Song-mi, accompanied by the Shanghai City Symphony Orchestra at the Shanghai Oriental Art Center in Shanghai. They performed two pieces together, Antonin Dvorak’s “Songs My Mother Taught Me” followed by “Arirang,” a traditional Korean folk song that is registered by both South and North Korea as an Intangible Cultural Heritage on Unesco’s Representative list.

“My dream finally came true today,” said Won after successfully closing the joint performance, bowing to the audience with one hand holding tightly onto Kim’s.

“My heart is too full for words,” said Kim after the concert.

“What I felt while rehearsing together and having a meal together is that although we live in different lands and performed in a foreign land to both of us, we belong to one nation. We liked the same food, we speak the same language. I also believe that the day will come when we will proudly stand together before the world and perform fabulous music,” said Kim.

Won said, “If East and West can do it, why not North and South?” and he began his journey without realizing just how long it would take.

“I say that the May concert helped me realize my dream because it has marked the beginning of a series of joint concerts the two Koreas can have, which can ultimately result in the creation of an inter-Korean orchestra. The beginning of music diplomacy on the Korean Peninsula,” Won told the Korea JoongAng Daily on Dec. 15. 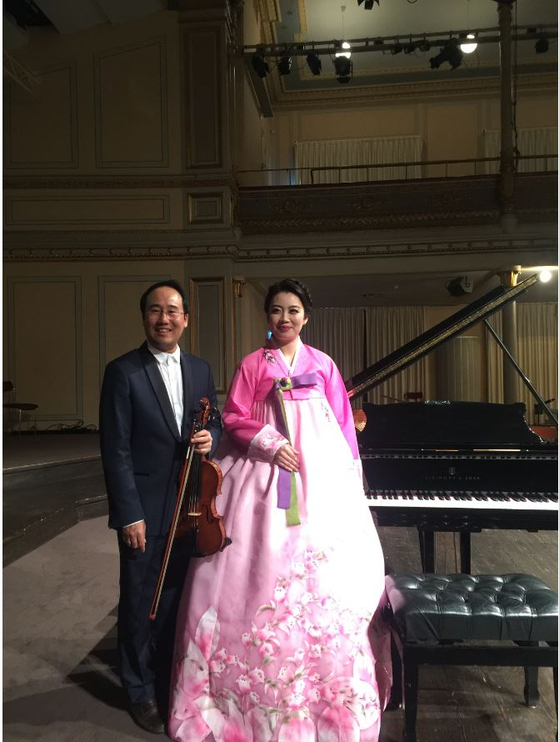 Won and Kim after another joint performance in Stockholm last September. [WON HYUNG-JOON]

Won was able to hold another concert with soprano Kim in Stockholm last September.

According to Won, there were several government-level joint performances of K-pop concerts and cross-border exchanges especially in 2018, but he believes his performance with soprano Kim was a first for classical music.

After such a historic moment, questions arose about the effectiveness of the utopian music diplomacy and whether or not it was possible for it to deliver tangible steps toward reunification, or at least a better relationship between Seoul and Pyongyang.

To address such doubts and curiosities, the Washington-based Institute for Policy Studies organized an online forum titled “Music Diplomacy on the Korean Peninsula” on Dec. 14, local time, inviting Won and Frank Jannuzi, formerly the policy director of East Asian and Pacific Affairs for the U.S. Senate Foreign Relations Committee, who is also the president of the Maureen and Mike Mansfield Foundation, as panelists. The session was chaired by John Feffer, co-director of Foreign Policy in Focus at the Institute for Policy Studies.

“Some people can say, so what happened after the joint performance with North Korean soprano Kim. I mean, that’s what I want to say, especially to the government of both sides. Did unification happen because of this? Or did a war break out?” said Won. “This is nothing and it took 10 years. But how can we achieve unification if we can’t even perform together?”

According to Won, the power of music is that it transcends conflict and that is why music diplomacy is crucial on the Korean Peninsula.

“Amid the cycle of practice and performance that makes up the routine of every musician, I began to see music as a tool for reconciliation,” he said. “Though they [each member of an orchestra] all have their own distinct sounds and timbre, the act of coming together still allows them to create harmony. Before the start of a concert, musicians tune their instruments, then adjust to align their sounds with each other. I suggest that in this, one can find a kind of ‘unification’ of their own.”

Therefore, says Won, music diplomacy is not a one-time project. It should be frequently carried out so that people can eventually listen to each other.

“Without actively perceiving others around us, it is impossible to create something together. We can apply this principle to not only the division between the North and South, but also to disagreements in general: Conflict arises when we don’t listen to each other,” Won added. 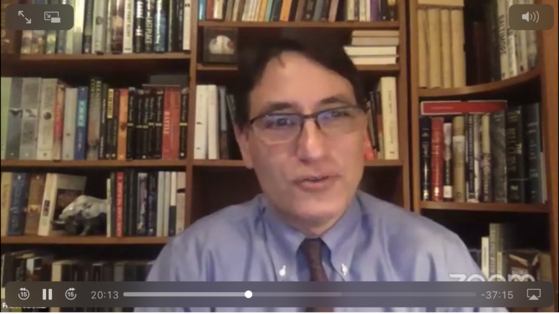 Frank Jannuzi, former policy director of East Asian and Pacific Affairs for the U.S. Senate Foreign Relations Committee, who is currently the president of the Maureen and Mike Mansfield Foundation, speaks during an online forum on "Music Diplomacy on Korean Peninsula" on Dec. 14. [SCREEN CAPTURE]


Jannuzi agreed with Won’s theory and said that it is true that many of the humanitarian efforts, whether they be cultural outreach by musicians, dancers, food aid efforts by NGOs or even family efforts to get in touch with their loved ones, “have traditionally been very difficult and have even had the possibility of placing South Korean citizens in legal jeopardy if they were violating the national security laws of the South which view contact with the North with a strong degree of suspicion.”

But as a “failed saxophonist,” Jannuzi said he also believes that music indeed has special bridging qualities across race, gender and nationality and that music diplomacy will help Korea take the “first step toward what would be a dream for unification later.”

“I really feel like the United States and South Korea have not always been the perfect partners in peace. We aspire very much toward the same objectives on the Korean Peninsula. Peace, unification and harmony,” Jannuzi said.

“And especially at this moment with President-elect Biden having just been chosen by the Electoral College here in the United States, and with his inauguration next year, we are going to have two champions for peace. I don’t say that as a slight against Donald Trump. He also did his best to strive to reach out to North Korea. But his efforts suffered from a lack, in my view, of due diligence and careful planning. And I think that you need both the right spirit but also some practice. A musician knows that you have to practice in addition to sort of imagining that you are going to go on stage and perform well. It takes hours of careful work and preparation to execute.”

He also added that he believes the Moon Jae-in government in principle is very supportive of humanitarian and other people-to-people outreach with the North and that he is hopeful that “the Biden administration will have a very similar approach to the Moon Jae-in government in recognizing that such people-to-people and humanitarian efforts should be encouraged and not discouraged.”

“I am hoping that both North and South will get back more diligently into the peace business because people-to-people contact can set in motion a virtuous cycle of trust-building communication and mutual understanding,” Jannuzi added.

“The absence of those contacts reinforces the vicious cycle of mistrust and blame and animosity. I really feel like this is and should be a time of opportunity on the Korean Peninsula. The North Korean leader wants to deliver benefits for his people, and the South Korean government has staked out a position of living side by side in peace as the first step toward what would be a dreamed for unification later. I think this is a position the Moon Jae-in government has taken in recognition of the fact that unification can be a scary concept maybe for both sides of the 38th parallel but especially I think for the North. The first step, living side by side in peace is a more modest objective than the ultimate dream but it’s one that I think music and people diplomacy can really foster.”