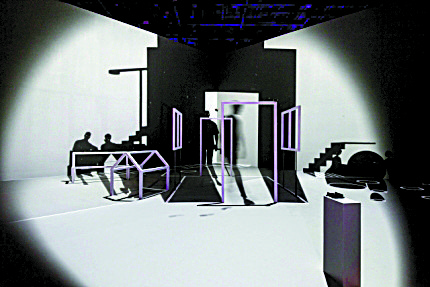 
Controversy over a solo show of media artist Moon Joon-yong, son of President Moon Jae-in, is heating up, after it was revealed that the 38-year-old artist received a 14-million-won ($12,700) relief fund for the exhibition titled "Beyond Your Eyes, Somewhere in Between." The solo show at Keumsan Gallery in central Seoul started on Dec. 17 and runs through Wednesday. The Seoul Foundation for Arts and Culture under the Seoul Metropolitan Government confirmed that Moon received the grant on Monday.

“By using 4.5 billion won in the extra budget in April, a total of 254 art organizations or individuals were selected to receive a relief fund up to 14 million won each, and Moon was one of them,” the Seoul Foundation for Arts and Culture said.

According to the foundation, the Covid-19 Artist Relief Fund recipients are divided into nine different fields including theater, dance, music and visual arts. The foundation received applications from April 6 to 17 and announced the recipients on April 29. Out of 281 applicants for the visual arts field, 46 were selected to receive a total of 65.61 million won.

"Moon was selected based on the cancelation of three exhibitions due to the pandemic and the appropriateness and feasibility of the exhibition," the foundation said. "It is not based on the artists’ economic background, but it is a relief fund to relieve the damage caused by the suspension of artistic activities. We measured the level of damage by considering the cancelation of exhibitions and performances."

However, the situation has stirred criticism among opposition party politicians. "If you are a president's son, shouldn’t you give a chance to other artists or give it up to someone else even if you are selected through the process?" Kyungnam University Prof. Kim Geun-sik, who is part of the People Power Party, wrote on his Facebook on Monday.

"If the whole nation is groaning with the pandemic and there are artists who are struggling with economic burden, is it reasonable for the president's son to apply for support and receive a relief fund and hold a solo exhibition amid the pandemic?”

Foreigners living in Seoul to get Covid-19 relief payment