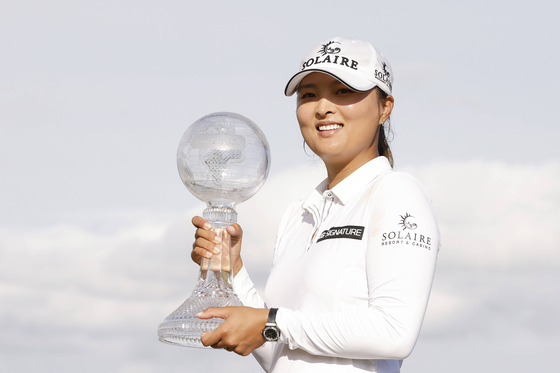 Ko Jin-young poses for a photo with the trophy after winning the CME Group Tour Championship at Tiburon Golf club in Naples, Florida, on Sunday. [GETTY IMAGES/YONHAP]


It only took four tournaments to prove exactly why Ko Jin-young is world No. 1.

Ko, who has only made four appearances on the LPGA Tour this season, surged to victory at the season-ending CME Group Tour Championship at the Tiburon Golf Club in Florida on Sunday, finishing with a four-day total of 18 under par.

Ko started the final round one shot behind leader Kim Sei-young, but got off to a quick start with a birdie on the par-5 first. She added another on the par-5 sixth but quickly evened out her score back to one under par as she finished the first nine holes with a bogey on the par-4 ninth.

It was the back nine when Ko really jumped up.

With three straight birdies from the par-3 12th to par-5 14th, Ko quickly made her way up to the top of the leaderboard and extended her lead by three shots. But she wasn’t done. Ko stretched it even further to a four-shot lead with a sixth birdie on the par-3 16th.

“I didn’t see the scoreboard,” Ko was quoted as saying on the LPGA website. “I just felt like, okay, I am the leader. So, I just wanted to keep it going.”

“He said, ‘You have a four-stroke lead so you can enjoy this time,’” Ko was quoted as saying. “But when I arrived at the green [with a downhill 10-footer for a birdie] he told me, ‘Lorena Ochoa [whom Brooker worked for before her retirement] always said, ‘Dave, professionals finish strong.’”

Those words from Ko’s caddie pushed her forward as she rolled in the downhill 10-foot putt for a birdie to finish the final round at six under par, 66. Ko’s final round included seven birdies and a bogey, which was good enough for her to finish the week with a total of 18 under par, 270.

That score also allowed her to finish the tournament five shots ahead of the runners-up, Hannah Green of the United States and Kim of Korea.

Winning the season finale also means Ko hit the jackpot, as the prize pot for the winner was worth $1.1 million. With that, Ko also managed to top the official money ranking for the 2020 season, despite only actually competing in four LPGA tournaments.

Due to the coronavirus pandemic, Ko stayed in Korea for most of the year, and it wasn’t until the Pelican Women’s Championship presented by DEX Imaging and Konica Minolta on Nov. 19 that she started competing in LPGA tournaments.

But Ko defied even her own expectations, finishing runner-up at the U.S. Women’s Open the week before the finale to earn a spot in the top 60 and finish her season strong with a big “W.” Before her final round, Ko said that the thought of being able to go home after the final 18 holes gave her less pressure.

“Before I teed off, I just thought, okay, 18 holes left and you can go home so just relax and just enjoy, just keep it up,” Ko was quoted as saying. “I just keep reminding myself of that one thing. And I just prayed all the time on the course. And with that, I enjoyed it.”

When the tournament ended, the season-ending award winners were also finalized. Although Kim Sei-young wasn’t able to maintain her lead to defend her title at the season finale, she still managed to win the LPGA Tour’s Rolex Player of the Year for the first time in her career.

Despite the pandemic, Kim also had quite a season where she won her first-ever major title at the KPMG Women’s PGA Championship and picked up her second win of the season at the Pelican Women’s Championship. 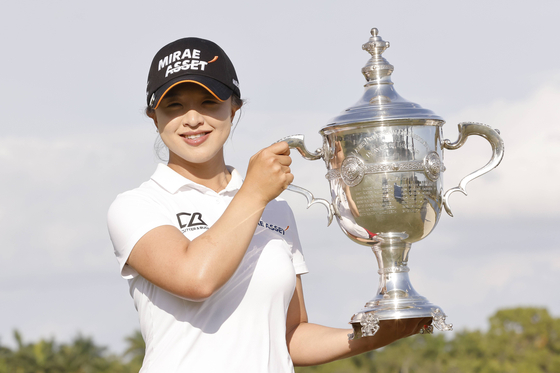 Kim Sei-young poses for a photo with the trophy after being named the Rolex Player of the Year this year on Sunday. [GETTY IMAGES/YONHAP]

Kim’s performance allowed her to become world No. 2 in the world ranking this season.

It was also quite a year for former world No. 1 Park In-bee. Park finished second in the Rolex Player of the Year standing, but she still picked up a win this season at the ISPS Handa Women’s Australian Open back in February. Her consistency this season also allowed her to move up the world ranking to No. 3, meaning that as the season ends, three Koreans — Ko, Kim and Park — sit in the top three spots.

Danielle Kang of the United States won the Vare Trophy, given out to the player with the lowest scoring average for the season, with an average of 70.082.