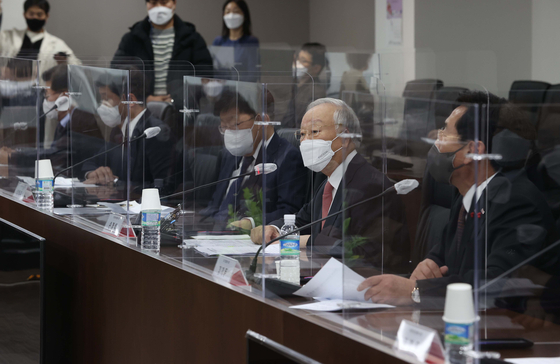 Sohn Kyung-shik, head of the Korea Enterprises Federation, speaks at a press briefing held at the office of the Korea Federation of SMEs in Yeouido, western Seoul, on Tuesday. [YONHAP]


Korea Inc. is challenging legislation that would hold chief executive officers and other high-ranking managers accountable for occupational accidents and deaths.

A group of business lobbying associations expressed its worries Tuesday about bills advocated by both the ruling and main opposition parties.

“The country is tilting toward simply punishing CEOs rather than focusing on preventing tragedies,” said Sohn Kyung-shik, head of the Korea Enterprises Federation (KEF), in a briefing held in Yeouido, western Seoul.

The association joined other business groups in a statement calling for the cancellation of the bills.

“The proposals are so excessive that the business community finds them hard to accept,” the statement read. “The existing occupational health and safety act can make the head of a business responsible [for industrial accidents], but the new bills impose mandatory minimum sentencing of two years to five years.”


That minimum jail term is heavier than in the United States or Britain, it said.

Presently, if an industrial accident occurs at an incorporated company, the law holds either the owner or the business entity accountable except for exceptional cases when a particular individual deliberately caused the hazard.

The bills extend responsibility for accidents to chief executive officers.

The groups that joined in the statement included the Korea Chamber of Commerce and Industry, Korea International Investment Association, Korea Federation of SMEs and Construction Association of Korea.

Civic organizations and politicians are pushing tougher penalties for accidents on industrial sites, following a series of tragedies at big conglomerates like Samsung Electronics and Posco.

The number of occupational deaths stood at 2,020 in 2019, according to the Ministry of Employment and Labor.

The occupational safety issue arose two weeks after the ruling Democratic Party, with its robust majority in the legislature, pushed through three bills that will tighten scrutiny over corporate governance structures and raise damage compensation by companies.

A battle over public opinion

Handing the debt over