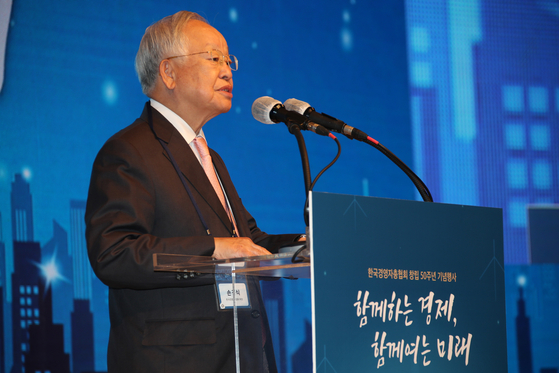 Sohn Kyung-shik, head of Korea Enterprises Federation, speaks during a ceremony celebrating the 50th anniversary of the group at Hotel Shilla in central Seoul. [YONHAP]

CJ Group Chief Sohn Kyung-shik, head of Korea Enterprises Federation (KEF), said that the business association will be more outspoken for the reform of outdated regulations in commercial and antitrust laws on top of its traditional objectives of building cooperative relations between management and labor.

“The Korea Enterprises Federation will keep on calling for the lifting of regulations that impede growth of new businesses while promoting investments,” he said during a ceremony designed to mark the 50th anniversary of the federation.

“We will also play a more active role in amending laws blamed for putting undue pressure on management,” Sohn said.

In line with the renewed focus, the group plans to release a report on obstacles facing corporate management in December.

The KEF went on to note that its member companies will participate in the New Deal program, the government’s 160-trillion-won ($133 billion) proposal aimed at reinvigorating the Korean economy through innovative digital transformation and eco-friendly initiatives.

The Korea Internet Corporations Association, a group representing Korea’s IT companies, held a forum last week to discuss how tech companies can efficiently make use of information to provide a better service.

The forum came after the passing of the so-called three data bills, which were approved by the National Assembly in January.

The bills aim to make available 1,310 terabytes of data to the private sector, more than double the 640 terabytes discussed in 2018, in establishing the basis for the data economy.

Despite the passage, participants voiced worries whether the bills could be fully implemented under strict privacy laws.

“It is questionable whether the new bills will achieve results as originally intended because of one-size-fits-all regulations and regulation on personal information,” said Park Seong-ho, secretary general at the Korea Internet Corporations Association during the forum.

“[The government] should help Korean companies boost their presence on the global stage with extended use of data by amending rules and regulations,” he said.

The Korea Chamber of Commerce and Industry, a major business lobby group, chimed in with the similar message on Tuesday, claiming that deregulation should take top priority while celebrating the announcement of the New Deal policy.

“The government’s strategy of pulling together digital resources as an opportunity for a new growth engine appears to be a prudent move in the wake of the coronavirus,” the group said in a statement, “But we hope that the government will expedite the process to reform the outdated law.”