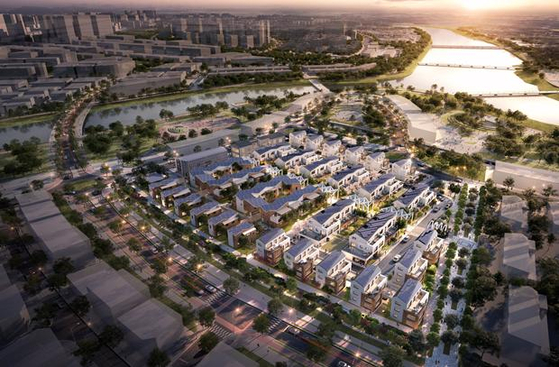 
A pilot "smart city" in Busan will start selecting its future residents on Christmas Eve in a ceremony broadcast live.

Residents of the Busan Eco Delta Smart Village will enjoy high-tech services and everything is supposed to be "smart," from their homes to their unmanned stores and hospitals. The health of the residents will be monitored by smart bands they wear on their bodies, and workout plans will be scheduled for them by programs run on artificial intelligence software.

Garbage will be collected by robots, the city's water quality will be evaluated constantly by machines and vegetables will come from a smart farm using automated technologies.

Korea Water Resources (K-water) and the Ministry of Land, Infrastructure and Transport on Wednesday said they will choose 54 lucky families at an event at the Bexco exhibition center that will be broadcast live on YouTube.

People have already applied to live in the new city and gone through interviews, and 18 households will be selected from those applications.

The remaining 36 will be selected through a lottery.

Two units in the village will be run as model homes that visitors can tour to experience the smart technologies that someday may be part of their lives.

Some 3,000 families have applied to move in.

According to K-water, some 40 innovative technologies are being used in the pilot city, which is 15 kilometers (9.3 miles) west of Busan Station and north of the Busan-Jinhae Free Economic Zone. It covers a 21,035-square-meter (226,000 square foot) area.

The lucky winners will have to take a training program for a year before moving in at the end of 2021. They can live there for up to five years.

They will give feedback vital to developing the "smart city."

“We will do our best along with the residents that are chosen to make Busan Eco Delta Smart City a leading model for a global smart city,” said K-water CEO Park Jae-hyeon.

So-called smart city technology has been pushed by the Moon Jae-in administration.

In January 2018, just six months after the administration took office, it named Busan and Sejong as locations for smart city projects.

In February 2019, Moon was briefed at Bexco in Busan on the nation’s smart city plans as well as some of the technologies that were in development.

“Each and every country in the world is competing ferociously in the smart city [race] in hopes of leading the fourth industrial revolution,” Moon said on that visit. “However, we are the world’s first to create trial cities on a national level.”