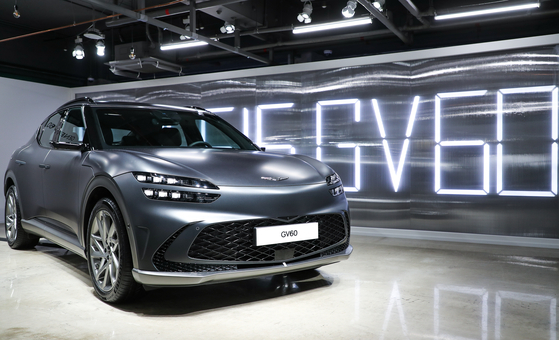 With automobiles now becoming more like computers on wheels, carmakers are aggressively competing in software development.

The rapidly growing electric vehicle (EV) market has only made their efforts that much more urgent.

With all the features, EVs today are a lot like smartphones.

According to Hyundai Motor, the Genesis GV60, which was debuted this month, has a wireless software update function, known as over-the-air-programming (OTA).

This feature allows a regular update of software installed on the vehicle, much like a smartphone.

The software update is especially notable as it makes changes to the electronic control system, which operates the suspension, brakes, steering and airbags.

Previously, updates were only made to the vehicle’s infotainment system, which includes the head-up display and navigation systems.

Other automakers are also increasing development of their own software in transitioning to the manufacturing of EVs.

One example is General Motors (GM).

GM last month announced its Ultifi software platform, which will be built into all GM vehicles starting 2023.

“Ultifi is a big, big step in our software strategy,” said Scott Miller, a GM vice president. “Today, cars are enabled by software. With Ultifi, cars will be defined by it.”

Miller said one of the strengths of Ultifi is “continuous integration.”

“We’re separating the software from the hardware so we can continuously upgrade apps,” Miller said. “It will allow us to be very agile and constantly learn how to make it better.”

The software is not only targeted at improving the driving experience but also preventing accidents.

The software on the numerous sensors installed could help the driver have more control in unfavorable weather conditions, including slippery roads, or reduce the speed of vehicles in school zones.

Due to the vast potential, European automakers are also jumping on the bandwagon.

Volkswagen has 5,000 people working on software development, while Mercedes-Benz is working on its own operating system (OS) jointly with Santa Clara, California's Nvidia.

One of the key reasons legacy automakers are competitively developing software is because future cars are rising as new IT platforms.

On average, 80 million vehicles are sold globally a year, far fewer than the 500 million smartphones sold every year, but the mobility IT market is perceived as a blue ocean.

Apple might also move into the vehicle market, though it hasn’t confirmed any plans.

“The line between IT devices and the automobile will become more ambiguous as artificial intelligence technology becomes more advanced,” said Jeong Tai-kyeong, an AI Convergence professor at Hallym University. “As we have experienced through the smartphone, even in future cars, companies that fail to develop their own software will be pushed out of the platform competition.”

The Korea Automobile Manufacturers Association (KAMA) recently expressed its opposition to a bill in the U.S. House of Representatives that increases tax credits to unionized EV automakers in the United States

“This has the potential of violating the bilateral free trade agreement between Korea and the U.S. as well as WTO’s subsidies agreement,” said KAMA Chairman Chung Man-ki.

An additional $500 tax incentive goes toward EVs that have batteries made in the U.S.

The tax incentive will significantly lower the price of EVs sold in the U.S. compared to those imported from Korea.

Other automakers, including Japan’s Toyota and Honda, have opposed to the bill.