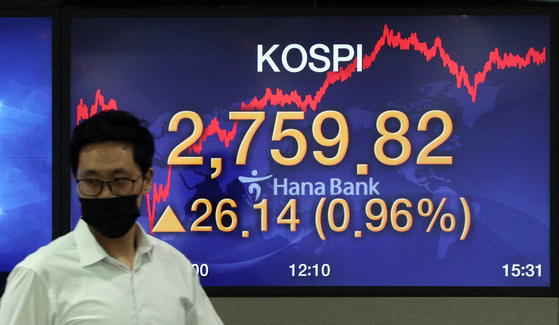 The screen in a dealing room in Hana Bank in Jung District, central Seoul, shows the closing figure for the Kospi on Wednesday. [NEWS 1]

Trading volume was high at about 1.1 billion shares worth some 19.9 trillion won ($18 billion), with losers outnumbering gainers 491 to 360.

The key index rebounded on optimism for a better corporate environment next year. Chip and auto shares led the gain, while pharmaceuticals slumped.

However, concerns over a new strain of Covid-19 in Britain and discord over the U.S. stimulus deal lingered.

LG Electronics surged by the daily permissible limit of 30 percent to 119,500 won after the firm revealed its plan to launch an electric car parts joint venture worth about $1 billion next year with Canadian auto parts company Magna International.

The local currency closed at 1,107.9 won against the dollar, up 0.5 won from the previous session's close.