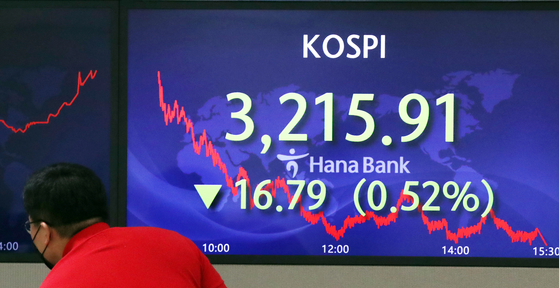 A screen in Hana Bank's trading room in central Seoul shows the Kospi closing at 3,215.91 points on Wednesday, down 16.79 points, or 0.52 percent, from the previous trading day. [NEWS1]


Stocks retreated for a fourth consecutive session Wednesday, as the resurgence of the new coronavirus weakened investor sentiment for risk. The won fell against the dollar.

Stocks got off to a strong start as bargain hunters sought to buy oversold stocks after the benchmark index lost nearly 2 percent in the past three sessions amid rising concerns over the fourth wave of the pandemic in the country.

Hopes of an economic rebound also backed the stock prices, with the country's exports increasing 32.8 percent on-year in the first 20 days of July.

But the key stock index increasingly lost ground as new Covid-19 cases soared to a fresh high of over 1,700 on Wednesday.

"The hike in Covid-19 cases seems to have boxed the foreign exchange rate at a 1,150 won-range, and increased foreign selling," Daeshin Securities analyst Lee Kyung-min said.

The local currency closed at 1,154 won to the dollar, up 3.6 won from the previous session's close.