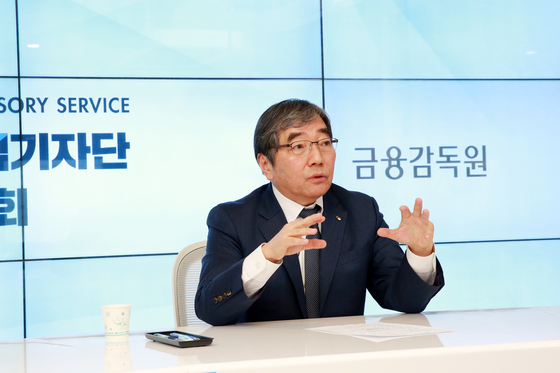 
Gov. Yoon Suk-heun of the Financial Supervisory Service (FSS) emphasized that the financial watchdog needs to be an independent body with its own budget to better serve its role, during an online press conference held Wednesday.

Currently, the Financial Services Commission (FSC) is broadly in charge of financial policies and supervision, while the FSS is then entrusted with the authority from the FSC to oversee and regulate financial companies.

"Financial scandals in Korea, like the latest private equity fund scandal, show a certain pattern," Yoon said. "The government tries to raise a certain area of financial business, risk is created in the process, then that risk eventually leads to consumer damage."

"Under the current system [with two supervising institutions], it is difficult to hold one institution responsible," Yoon said. "This makes the supervision of financial markets inefficient and delays feedback."

According to Yoon, a financial watchdog needs a certain level of independence to serve its role right, while actively communicating with the financial policy maker.

The governor said he is considering multiple options in reforming the relationship between the FSC and FSS by looking into examples overseas.

While the FSC and FSS had jointly announced ways to reform private equity fund-related regulations in April, Yoon said "the latest proposal may not be enough... We will consider ways to further improve our regulations."

For instance, there have been questions over whether it was right to let banks offer such difficult financial products to general investors, according to Yoon. Limiting private equity fund purchases to professional investors could be considered.

As for the recent stock market spike, Yoon said the "volatility of the market is currently very high considering the real economy remains sluggish due to the coronavirus and excess liquidity."

The FSS head advised long-term investment at this time, rather than short-term profit-taking.

Yoon also said the FSS asking banks to cut credit loans before the end of the year isn't too much intervention, as it was a necessary move considering the serious increase in unsecured loans this year, especially in November. People scrambled to get loans last month before tighter regulations on unsecured loans went into effect at the end of the month.

To reduce the accumulated household debt for the year as advised by the financial watchdog, commercial banks have been reducing or stopping unsecured loans this month.

"Individual banks might want to give out more loans for the benefit of the bank, but it could lead to great national risk," Yoon said.