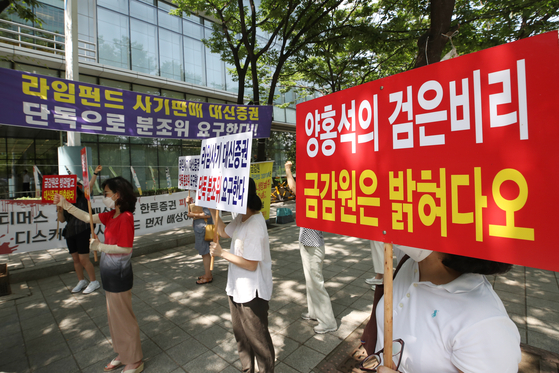 An association of victims of Daishin Securities and Lime Asset Management held a rally on Aug. 20 in front of the Financial Supervisory Service in Yeouido, western Seoul, protesting for a prompt mediation by the consumer protection agency. [YONHAP]


The banks and securities companies that sold the problematic funds structured by Lime Asset Management announced Friday they will nullify the investment contracts of trade finance funds and fully compensate their investors.

Woori Bank and Hana Bank on Thursday held an emergency board meeting and made the decision to implement the recommendations from the Financial Supervisory Service (FSS).

“After a thorough legal examination, we decided that the issue was crucial for the protection of consumers, restoration of trust and the stability of the finance market,” Woori Bank said in a statement.

Hana Bank and Mirae Asset Daewoo said they are planning to take legal measures against Shinhan Investment and Lime Asset Management. Lime's trade finance funds were partially financed by loans from Shinhan. Shinhan also played a major role in building the fund and selling a significant amount to its customers.

The FSS's Financial Dispute Mediation Committee concluded on June 30 that the shares of Lime funds sold after November 2018 can be held under a civil law that permits the termination of contracts in the case of negligence. The committee then ordered the banks and brokerage firms that sold the funds to refund all investment money to their investors.

The decision of whether or not to accept the FSS recommendations was initially due on July 27. But the banks and securities companies requested an extension, questioning whether or not a 100-percent refund of the customer funds is still lawful, when the loss ratio for each bank and brokerage house is not yet known. The FSS responded by giving the firms one extra month to decide.

FSS Gov. Yoon Suk-heun has been pressuring the firms with grave warnings. During Tuesday’s executive-level meeting, Yoon demanded that the agency's consumer protection efforts be informed by the implementation of FSS recommendations when evaluating financial companies. Rejection of FSS measures would be considered a lack of effort in consumer protection, he said, which will negatively affect the assessment.

As banks and securities companies have agreed to implement the recommendations set by FSS, the first full investment refund in history may become a reality.

“This is the first time that FSS pressured fund sellers to accept the conclusions from the Mediation Committee by disclosing an executive’s statements discussed during the executive session,” said an employee of a financial company. “The companies would have felt pressured by the threats from the monitoring organization that noncompliance will lead to disadvantages.”