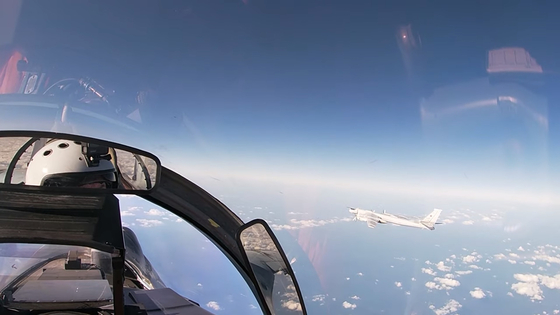 A screenshot from a video uploaded by the Russian Defense Ministry showing a recent aerial exercise conducted with Chinese planes. A total of 19 military aircraft from the two countries violated South Korea's air identification zone on Tuesday. [SCREEN CAPTURE]


The U.S. State Department on Tuesday publicly voiced support for its ally South Korea after more than a dozen Chinese and Russian aircraft violated the country’s air defense identification zone, known as Kadiz, prompting Seoul to scramble its own jets in response.

According to South Korea’s Joint Chiefs of Staff (JCS), a total of 19 planes entered the zone on two separate occasions on Tuesday. The first violation occurred at around 8 a.m., when four Chinese H-6 bombers flew into Kadiz above the East China Sea. Two of them exited the zone from an area east of Ulleung Island in the East Sea.

The second violation involved 15 Russian Tu-95 bombers and A-50 early warning and control planes that entered Kadiz in sequence. All 19 planes had left the zone by 3:20 p.m. and there was no violation of Korean airspace, the JCS said.

Seoul’s Air Force launched several of its fighter jets as an “ordinary tactical measure” in response to the first violation by the Chinese planes, according to the JCS, which said the actions from China and Russia appeared to be part of a joint aerial exercise conducted by the two countries.

Japan, which claims South Korea’s Dokdo Islets in the East Sea as its own, also scrambled its own fighter jets in response to the Russian and Chinese intrusions into its air identification zone, according to Kyodo News.

South Korea’s Ministry of Foreign Affairs lodged a complaint against the violations to China and Russia through diplomatic channels, a ministry spokesperson said. The Defense Ministry also said it expressed concern over the incidents to Chinese and Russian military attaches in Seoul.

The response from Washington was far more forceful.

Calling the Chinese and Russian intrusions “attempts to destabilize the region,” a U.S. State Department official told Voice of America it was closely coordinating with Seoul over the incident, while reaffirming it held an “ironclad” commitment to the defense of U.S. allies.

Russia’s Defense Ministry later noted the “patrol” its planes undertook this week was meant to deepen its military cooperation with China, and was not directed at any other third countries.

Air defense identification zones, known by their initials ADIZ, are unilaterally set by countries for areas typically larger than traditional national airspaces. As in the case of South Korea and China, these zones can overlap and are not subject to regulation by international treaties or agreements.

Nonetheless, given these areas are delineated for the purposes of national security, it is the norm for countries to notify each other when their military aircraft enter such zones.

The number of unauthorized entries by Chinese and Russian planes into Kadiz have dramatically increased in the past few years amid growing tensions between Beijing, Moscow and Washington in the region.

In July 2019, three Russian planes entered Kadiz, and one of the planes veered into Korean sovereign airspace for almost 30 minutes — the first time Seoul’s territorial airspace was violated since the 1950-53 Korean War.

Moscow denied any trespassing had occurred, though one of its military officials in Seoul — perhaps in an unauthorized move from his government — expressed regret over the incident which he attributed to mechanical error.

Military analysts say the repeated violations of Kadiz are closely linked to China’s strategic efforts to exert its influence beyond its proximate waters in cooperation with Russia, in a quasi-alliance aimed at countering American influence in the region.

The non-proliferation regime in crisis