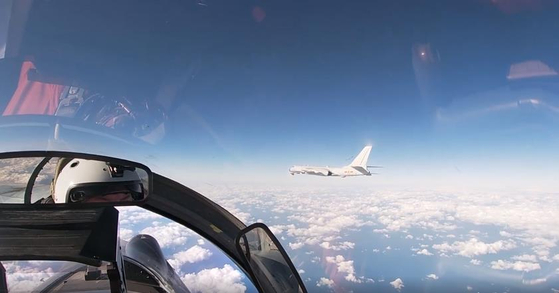 A Chinese Xian H-6 jet bomber is seen from the cockpit of a Russian Sukhoi fighter jet during the country's drills in December 2020, the previous instance of China and Russia entering the Korean air defense identification zone (Kadiz). [YONHAP]


The Air Force on Friday deployed fighter jets to the eastern waters off the Korean Peninsula after Russian and Chinese aircraft were detected in the Korea air defense identification zone (Kadiz) without prior notice, according to military authorities.

The incident came a day after naval movements by both countries in the waters between Korea and Japan, south of the Kadiz area where Friday's incident occurred.

The Joint Chiefs of Staff (JCS) said it is looking into why two Chinese and seven Russian military planes entered Kadiz northeast of Dokdo, the country’s easternmost islets.

JCS did not specify how long the planes flew in the zone before leaving. However, JCS clarified that none of the intruding planes trespassed the country’s territorial airspace.

Generally, a country’s air defense identification zone may extend beyond its territorial airspace to give it ample time to identify incoming aircraft and formulate a response if necessary.

After detecting the entry of the Chinese and Russian aircraft, the JCS scrambled to prepare F-15K and KF-16 fighter jets and KC-330 air refueling tankers for a possible emergency.

The JCS said that the Chinese military responded to its queries by saying that its planes were carrying out “routine drills” in the area.

"Our assessment is that the situation was joint Chinese and Russian military exercises, but additional evaluation is needed," the JCS said in a statement.

The Chinese and Russian jets’ entry into Kadiz followed joint naval drills by the two countries the day before, when three ships — a Russian Udaloy-class destroyer, a Chinese Luyang-III-class destroyer and Jiangkai-II-class frigate — passed through the Tsushima Strait between the peninsula and Japan headed in the direction of Taiwan between 5 p.m. and 7 p.m. on Thursday.

The Chinese naval vessels were the same that had passed the Tsushima Strait on their way north on Nov. 13.

The number of instances of Chinese and Russian military aircraft entering Kadiz have increased in recent years, in part due to the countries’ disagreement over the validity of the zone.

In contrast to a country’s airspace, which is internationally recognized barring overlapping territorial claims, countries unilaterally demand that foreign aircraft take steps to identify themselves in their self-designated air defense identification zones.

However, Moscow does not recognize Kadiz at all, while Beijing has said in the past the area does not constitute territorial airspace and that all countries should enjoy freedom of movement there.

Seoul and Tokyo accused the two countries of violating their airspace, which Moscow and Beijing denied.

The increasing frequency of movements by the militaries of China and Russia in the waters and air surrounding the Korean Peninsula are seen by some analysts as a sign that the two countries are coordinating their military readiness in Northeast Asia to counter the U.S. alliance with both Korea and Japan.

“While large-scale joint exercises take great time and expense to organize, the two countries’ movements appear to be a regular occurrence,” Park observed.