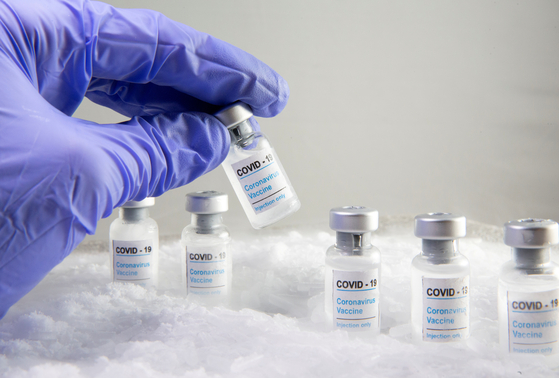 
The authorization period for coronavirus vaccines and treatments will be reduced from 180 days to 40 days, under plans announced by the Ministry of Food and Drug Safety Sunday.

After authorization, vaccines must receive another approval prior to sales of each batch — a system known as lot release, which is mandatory for biological products before market release. This step would be reduced to 20 days, from the usual two to three months, the ministry added.

Altogether, Covid-19 vaccines may reach the market in around two months' time from the point the importer or manufacturer starts the process for government approval.

The details were part of a set of guidelines published by the Drug Safety Ministry on Sunday in regards to Covid-19-related pharmaceuticals.

As of Sunday, three vaccines developed by foreign pharmaceuticals were under previews for approval — AstraZeneca, Janssen and Pfizer. The government recently announced closing on deals to secure supplies of all three of them.

Under Korean pharmaceutical regulations, a preview is a process in which an importer or manufacturer asks for an advisory review of clinical data and other documents before officially embarking on procedures to obtain government approval.

The ministry added that it will likely start the process for an emergency use authorization for an antibody treatment developed by a local firm this month.

Celltrion confirmed Sunday that it plans to announce Phase 2 clinical trial results the upcoming week and submit documents for the emergency approval, which would be granted on the condition that the company turns in Phase 3 clinical trials later on.

At the moment, Gilead Sciences’ remdesivir is the only Covid-19 treatment supplied to domestic hospitals. Originally developed as a cure for Ebola, the drug was approved for special imports in July.

In the past few months, Korean firms GC Pharma and Celltrion’s Covid-19 treatment candidates had been offered to individual patients upon their doctors’ request after it was confirmed that existing treatments had minimal effect.

If Celltrion succeeds in receiving an emergency usage authorization, it would be Korea’s first new drug specifically made to combat the respiratory disease to be supplied en masse to domestic hospitals.

As of Sunday, five vaccines and 15 treatments were undergoing clinical trials in Korea to fight off the coronavirus.