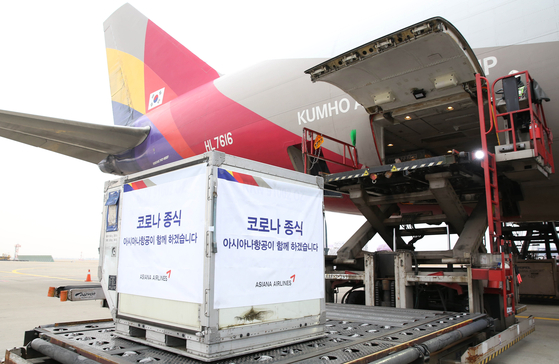 Sputnik 5 vaccines are being loaded on Asiana Airlines' OZ795 flight that took off from Incheon International Airport to Moscow Domodedovo Airport on Tuesday. [ASIANA AIRLINES]

According to the air carrier, Russian-developed Sputnik V vaccines were delivered to Russia twice on Friday and then once on Tuesday. That makes Asiana the first airline to ship Covid-19 vaccines in a finished state overseas.

The most recent flight was OZ795, which departed Incheon at 8:45 a.m. on Tuesday and landed at Moscow Domodedovo Airport the same day at 12:45 p.m.

Earlier this month, Korean Air transported raw materials for the making of coronavirus vaccines to Amsterdam.

Sputnik V was developed by a team of researchers at Russia’s state-controlled Gamaleya Research Institute of Epidemiology and Microbiology. The vaccine was approved for domestic distribution by the Russian government in August ahead of wide-scale clinical trial results.

Sputnik V is a viral vector vaccine that requires transportation at minus 20 degrees Celsius (minus four degrees Fahrenheit), the airline said. To achieve that environment, the air carrier worked with partners to review the entire transportation process starting from packaging.

Because vaccines may lose their effectiveness if kept in the wrong conditions, a temperature-controlled cold chain had to be maintained from the manufacturing plant, to the logistics terminal at Incheon International Airport and on the aircraft traveling to Moscow.

Logistics is key to the successful roll out of Covid-19 vaccines.

Asiana Airlines set up a vaccine task force in September. The company contracted with producers of the necessary containers, expanded storage facilities and has prepared to secure large quantities of dry ice.

“We signed deals with five companies that produce special-purpose containers so far — they cover all temperature ranges required for vaccines from minus 60 degrees Celsius to eight degrees Celsius,” the company said in a Tuesday statement.