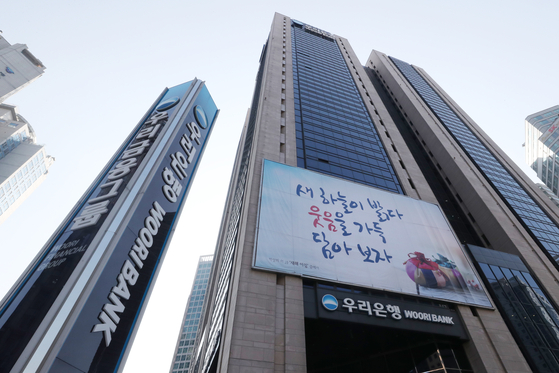 While the government failed to unload its stake in Woori Financial Group this year due to the Covid-19 pandemic's impact on stock prices, it vows to do so by 2022.

The Financial Services Commission on Wednesday said its Public Fund Oversight Committee held a meeting Monday and pledged to keep trying to sell the Woori Financial Group stake by 2022. That has been its goal since 2019.

The government was planning to sell its 17.25-percent stake in pieces, with the first sales to be made this year.

The committee wanted 12,300 won ($11) per share to try to recover the 1.7 trillion won of public money unrecovered from its investment two decades ago. It owns 124.6 million shares.

The government merged insolvent financial companies in the aftermath of the Asian financial crisis of the late 1990s, injecting a total of 12.8 trillion won between 1998 and 2006.

Through the years, it has recovered 11.1 trillion won of that investment.

While the committee planned to start selling parts of its stake this year, shares in the banking group fell below 10,000 won, making it difficult for the government to get its desired price.

Woori Financial Group’s stock started the year at 11,400 won, not too far from the government’s target. However, it fell below 10,000 won in February and hovered around that price.

Woori management did its best to boost the stock, including CEO Son Tae-seung, who bought back 25,000 shares this year. The company also encouraged its employees to participate in defending its stock's value by buying it.

In a statement, the oversight committee said it was monitoring the market closely to sell off pieces of its stake when the right conditions are met. Covid-19 has affected not only the share price but also the government's plans to hold events to meet with potential buyers at home and abroad.

A risky extension of the ban