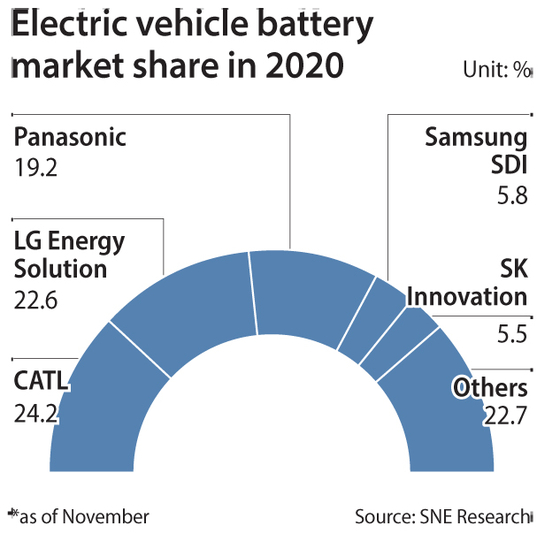 LG Energy Solution, a battery company affiliated with LG Group, was the No. 2 global electric vehicle (EV) battery producer this year as of November, according to data compiled by SNE Research.


Chinese firm CATL continued to hold the top spot during the same period.

From January to November, LG Energy Solution supplied 26.4 gigawatt-hours' (GWh) worth of EV batteries, accounting for 22.6 percent of the global market, according to SNE. That's a decrease from its 24.6-percent market share during the January through September period.

CATL delivered 28.1 GWh in EV batteries during the same period, accounting for 24.2 percent of the global market, up from 23.7 percent as of the previous month.

LG Energy Solution overtook Japanese battery maker Panasonic in the first quarter of this year, largely thanks to its deal to supply batteries to Tesla’s Model 3 as well as other mainstream EV models, including Renault Zoe and Audi e-tron. The Korean company had been at the top spot globally up until September.

CATL has emerged as a strong player after it also started supplying batteries to Tesla’s Model 3 to be sold in China.
Other Korean battery makers have shown little progress.

Samsung SDI, which accounted for 6.2 percent of the global market share as of September, is currently the No. 4 producer in 2020, with 5.8 percent.

Panasonic was in third place, with 22.3 GWh.