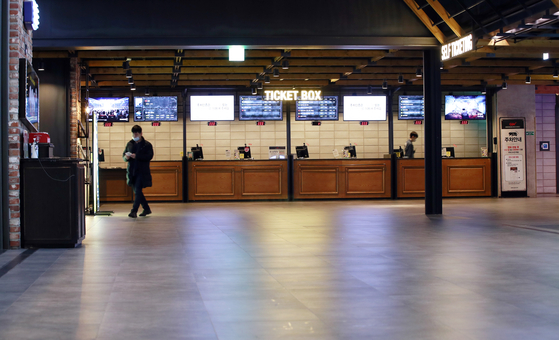 A nearly empty ticket-selling venue at one of the branches of a multiplex theater chain in Seoul after Covid-19 hit the country. [NEWS1]


Theaters in December sat almost empty with nearly all highly anticipated films scrambling to push back their release dates due to a spike in the number of daily coronavirus cases.  With the exception of small or independent films, only two films of note were released last month — “Josee” and “Wonder Woman 1984.”


Imminent releases include “New Year Blues,” “Seobok” and “Life is Beautiful” — all three of which were scheduled to hit screens last month.

Director Lee Yong-joo’s “Seobok” was one of the most anticipated films of 2020, generating buzz for the collaboration between Gong Yoo and Park Bo-gum. The sci-fi film revolves around an ex-intelligence agent Gi-heon’s last mission to deliver humanity’s first human clone, Seobok, to safety. 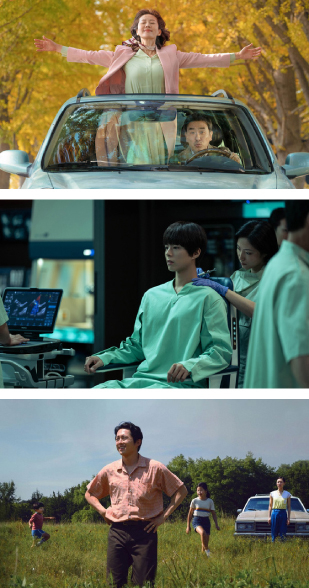 
“Life is Beautiful,” starring actors Yum Jung-ah and Ryu Seung-ryong, is a musical about a wife who, after finding out that her days are numbered, goes on a road trip with her husband to find her first love as her last birthday wish.

The three films are expected to unveil their premiere dates as soon as the current uptick in Covid-19 cases can be contained. But in the face of the unpredictable coronavirus, none of the film distributors can pinpoint a specific date, and that also goes for a plethora of other films which had hoped to premiere last year.

Based on the musical production of the same title, actor Jung Sung-hwa portrays independence activist Ahn Jung-geun (1879-1910) during his last year of life while in prison in "Hero." Jung starred as Ahn in the musical since 2009. Director Yoon was to have been immensely moved by the original musical and tried his hand at recording the songs live on the set, just as Tom Hooper’s “Les Miserables” (2012) did.

Action-crime film “Mogadishu” featuring actors Kim Yoon-seok, Zo In-sung and Heo Joon-ho, was another highly anticipated project which had already finished filming in Morocco early last year and was set for a summer release. The film is based on a real-life defection of two Korean embassies which took place in the mist of the Somali Civil War in the 1990s.

“The Book of Fish” is the second black-and-white film from director Lee after “Dongju: The Portrait of A Poet” (2016). “The Book of Fish” is the tale of a camaraderie that blossoms between Jeong Yak-jeon (1758-1816) who is a scholar from the Joseon Dynasty (1319-1910) and a peasant named Chang-dae who work together to write a book on marine biology titled “Jasaneobo.” The film features actors Seol Kyung-gu and Byun Yo-han as the scholar and the peasant.

“Hansan” is the second film in a trilogy based on general Yi Sun-sin (1545-1598), originally set for release this year. The first film “Roaring Currents” (2014) still ranks No. 1 in the history of local box office, having drawn over 17 million audience members. The film covers the period of the first battle after the outbreak of the Imjin War (Japanese invasion of Joseon from 1592-1598).

Another film set for release this year is political drama “Kingmaker.” Based on Uhm Chang-rok, a real-life kingmaker or person who brings leaders to power through the exercise of political influence, the film is anticipated to depict a gripping political battle as politician Kim Woon-beom (played by Seol Kyung-gu) strives to become president with the assistance of a kingmaker Seol Chang-dae (played by Lee Sun-kyun).

“Emergency Declaration,” a film which takes place on an airplane while the world below is plunged into an apocalypse, features stars Song Kang-ho, Lee Byung-hun, Jeon Do-yeon and Im Si-wan. It is director Han Jae-rim’s latest film and is also expected to hit the theaters this year.

The two maestros of Korea and Japan are each preparing for new projects as well. Director Park Chan-wook is filming “Decision to Break Up” (translated) with actors Park Hae-il and Tang Wei while director Hirokazu Koreeda is wrapping up a screenplay for his first try at a Korean film tentatively titled “Broker.” It is set to begin filming this year with mega-popular actors Song Kang-ho, Kang Dong-won and Bae Doo-na.

Korean-American director Lee Isaac Chung’s “Minari” is set to arrive in local theaters in the first half of this year. The film is based on the director’s own childhood and is about a Korean family that emigrates to Arkansas in the 1980s in search of the American dream. The film is receiving international accolades across the globe similar to director Bong Joon-ho’s “Parasite,” and film critics reckon it's in with a strong chance for an Oscar nomination. The film features Korean and Korean-American actors such as Steven Yeun, Han Ye-ri and Youn Yuh-jung.

Continuing with films that were scheduled to premiere last year, Netflix, a platform which streams in 190 countries, became the host for many that chose not to premiere on the big screen. 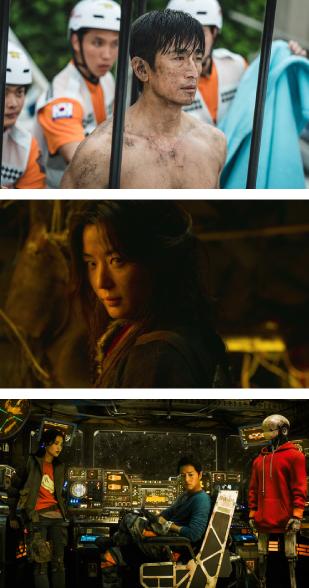 From the top, scenes from “What Happened to Mr. Cha?,″ “Kingdom: Ashin of the North,″ and ″Space Sweepers.″ The former premiered in Netflix on Jan. 1 and the latter two are scheduled to be released on the streaming platform sometime later this year. [NETFLIX]


“What Happened to Mr. Cha?” premiered on Jan. 1 on Netflix. Starring actor Cha In-pyo, the actor uses his actual name and adapts his own filmographies in the film to tell the story of a '90’s icon still caught up on his former glory and his struggles to become popular again.

Sci-fi film “Space Sweepers” stars actors Song Joong-ki, Kim Tae-ri, Jin Seon-kyu and Yoo Hae-jin as space pirates who come across a humanoid robot Dorothy, which is also a weapon of massive destruction. Netflix has yet to announce a release date for the film.

In terms of Netflix original series, be on the lookout for director Yeon Sang-ho’s “Hellbound,” “Kingdom: Ashin of the North,” and “Round Six.”

“Hellbound” is adapted from the Naver webtoon “The Hell,” in which the director scripted the story, and “Kingdom: Ashin of the North” is reported to be a side-sequel from the “Kingdom” series featuring actor Jun Ji-hyun. “Round Six,” starring actors Lee Jung-jae, Park Hae-soo and Heo Sung-tae among others, is director Hwang Dong-hyuk’s latest film about a survival game in which the ultimate winner is awarded prize money that could change their lives.