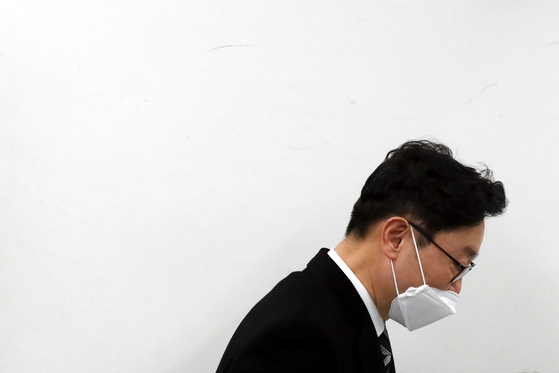 
Justice Minister nominee Park Beom-kye failed to mention a plot of land he owns in financial disclosure reports over the past eight years while serving as a lawmaker, the JoongAng Ilbo reported Monday.

Eight years of financial disclosure records for Park, a three-term lawmaker from the ruling Democratic Party (DP) nominated by President Moon Jae-in last week to head the Justice Ministry, did not include a large plot of undeveloped land he owns in his hometown of Yeongdong County in North Chungcheong, documents sourced by Rep. Yoo Sang-bum of the opposition People Power Party (PPP) showed. The records date from 2012 to 2020.

Public officials, including lawmakers, are required by law to make annual disclosure of income and assets.

When Park, a former judge, served as the civil affairs secretary in the Roh Moo-hyun Blue House in 2003, he included the land in his financial disclosure report. But when he started his lawmaker career in 2012 by winning his first term from Daejeon, he did not.

An election law violation is also possible if a candidate fails to offer accurate information about his or her wealth to the National Election Commission (NEC) or publishes an incorrect asset report in campaign materials. The six-month statute of limitations for election law violations in the past, including last April's general election, has expired.

“I only discovered about the omission as I went through the Blue House’s vetting process this time,” Park told the JoongAng Ilbo on Sunday. “I always made my financial disclosure through my aide, and I was surprised to find out that it was omitted.”

Park said it was an honest mistake. “It is a piece of land where the family graveyard, including the graves of my parents, are located. I have never considered it as an asset. I was really not aware of the omission.”

As controversy grew, Park issued a public apology on Monday. “It is my mistake,” Park said. “I offer my apology to the public. I will do better.”

Over the past years, Park has been a strong critic of lawmakers who hid their wealth in financial disclosures. When a candidate of the Saenuri Party, a predecessor of the PPP, in a July 2014 legislative by-election was accused of omitting assets in financial disclosure reports, Park, who was a party spokesman at the time, demanded a criminal investigation.

Moon nominated Park on Wednesday to succeed embattled Justice Minister Choo Mi-ae, expressing hope that he will be able to complete a reform process of the prosecution. Park will have to undergo a National Assembly confirmation hearing, but legislative approval is not required for a president to appoint a cabinet minister.

“When Park was working in the Blue House in 2003, he included this land in the financial disclosure report, so he was well aware of his ownership of the property,” PPP Rep. Yoo said. “But he left it out for eight years after he became a lawmaker. It seems highly intentional.”

In the 21st National Assembly, elected in April, underreporting wealth has been treated as a serious issue, and two lawmakers from both sides of the aisle are currently standing trials for election law violations.

PPP Rep. Cho Su-jin, a proportional lawmaker, was investigated and indicted for having reported a substantially smaller amount of wealth to the NEC before the general elections.

Rep. Kim Hong-gul, son of the late President Kim Dae-jung, was expelled from the DP in September over allegations he underreported property ownership. The prosecution indicted him in October for alleged election law violations.

Protecting the powers that be