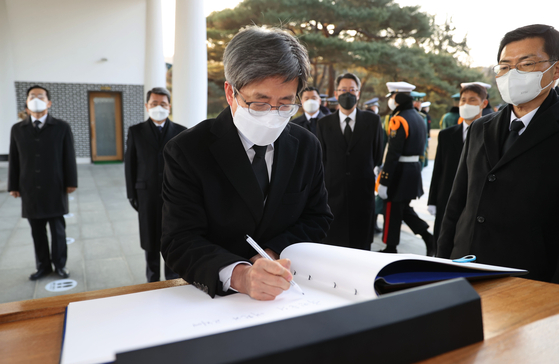 Supreme Court Chief Justice Kim Myeong-su signs a visitors book at the Seoul National Cemetery on Monday as he pays respects to the country's fallen to mark the new year. [YONHAP]


Korea’s top judge vowed Monday to fight all outside attacks on the independence of the judiciary in an apparent response to partisan broadsides leveled against judges in recent high-profile court cases.

In a New Year’s address delivered to reporters, Supreme Court Chief Justice Kim Myeong-su issued a rare statement about growing challenges faced by Korea’s judiciary in an increasingly polarized society, which he said created rifts that were “flooding into the courts.”

“At times, [these influences] go beyond a justified criticism of verdicts and lead to alarming personal attacks on individual justices,” Kim said.

Urging the country’s judges to act on their conscience as independent adjudicators and ignore pressure in high-profile cases, Kim pledged he would respond “resolutely and firmly against unjust outside attacks” threatening the independence of the judiciary.

While he did not name a specific case in particular, Kim’s remarks allude to public criticism of judges who made unpopular rulings in several recent high-profile cases.

Most recently, judges of the Seoul Central District Court convicted Chung Kyung-sim, wife of former Justice Minister Cho Kuk, on charges of academic fraud, and were subjects of an online petition calling for their impeachment that was signed by over 440,000 supporters of the ruling party.

Chung’s case demonstrates the intense political pressure faced by judges ruling on cases subject to partisan debate, which more often than not yield verdicts bound to disgruntle at least one side.

In some cases, like the Constitutional Court trial of former President Park Geun-hye that resulted in her dismissal from office, judges have had to request police protection for fear of personal vendettas.

Recent years have seen popular anger channeled into threats from the legislature. One ruling Democratic Party lawmaker went as far as to propose a bill named after a judge whose ruling allowed a right-wing rally in August believed to have led to many Covid-19 infections.

The bill, which proposed to strengthen restrictions on rallies for public health reasons, was heavily criticized by legal circles as well as by judges for threatening judicial independence.

Chief Justice Kim, however, also issued words of warning to the judiciary itself, noting that judges should “reflect [on] and regret” unjust rulings by courts in the past.

“We must look back with a heavy heart at the pain suffered by a plaintiff who was finally acquitted after a retrial,” Kim said.

That comment was believed to refer to the case of Yoon Seong-yeo, a man who was falsely convicted in 1989 of murdering a teenager in cold blood. Despite claiming his innocence for years, Yoon spent 20 years in prison until he was paroled in 2009.

It was only last year that another convict, serial killer Lee Choon-jae, admitted to the killing, thus corroborating Yoon’s claims. A Suwon court in November eventually cleared Yoon of all wrongdoing, while both the judiciary and police issued public apologies for the erroneous conviction.