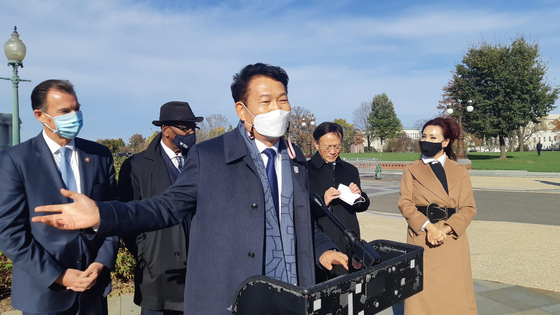 Rep. Song Young-gil, chair of the National Assembly's Foreign Affairs Committee, in a visit to Washington in November. Song said he would lead another delegation, a bipartisan entourage of six lawmakers, to Washington again this month in time for the inauguration of incoming U.S. President Joe Biden. [YONHAP]


A bipartisan delegation of six Korean lawmakers will visit the United States for incoming President Joe Biden’s inauguration on Jan. 20 and shore up the alliance with the country, according to a top ruling party representative.

Rep. Song Young-gil, chairman of the National Assembly’s Foreign Affairs and Unification Committee, will lead the delegation on a five-day visit to Washington from Jan. 19 to 24, meeting influential political figures in the U.S. capital, Song told the JoongAng Ilbo Sunday.

Meetings are being sought with foreign relations committee chairs of both houses of the U.S. Congress, Republican Senator James Risch and incoming House Committee on Foreign Affairs Chairman Rep. Gregory Meeks of the U.S. Democratic Party.

Noting the issue of peace on the Korean Peninsula will be at the top of the delegation’s agenda. DP Rep. Kim Young-ho said the visit was further aimed at “verifying the new administration’s North Korea strategy and approach while congratulating the beginning of the Biden administration.”

PPP Rep. Chung cast the trip’s objective as “restoring a traditional Korea-U.S. relationship” by shoring up ties that he claimed were pulled apart by the Moon Jae-in administration.

For DP lawmakers, another main goal for the trip is to explain to the Biden administration its recent passage of a highly controversial bill banning the sending of propaganda leaflets to North Korea.

The new law, which prohibits spreading items like leaflets, printouts, money or electronic storage devices near the inter-Korean border with a maximum jail sentence of three years, provoked condemnation from international human rights groups as well as several U.S. lawmakers on both sides of the aisle.

The bipartisan Tom Lantos Human Rights Commission in the U.S. Congress is expected to hold a hearing on the leaflet ban, headed by its co-chair Republican Congressman Chris Smith, who attacked the bill before its passage in December.

To such mounting criticism, Song said he and his fellow DP lawmakers would explain their justification for the law in “sincere” terms, expressing confidence that the matter was “one the Biden government will fully understand if it respects the legislature of an allied country.”

The trip holds particular significance as it is one of the first official contacts between Seoul and the Biden administration.

But not all are convinced that the delegation will be able to fulfill its principal aim of bolstering the alliance.

One former South Korean diplomat expressed concern about the divergent agendas of the DP and PPP delegates, noting a dissonance in their messages about issues, which could sow confusion and undercut the diplomatic significance of the trip.