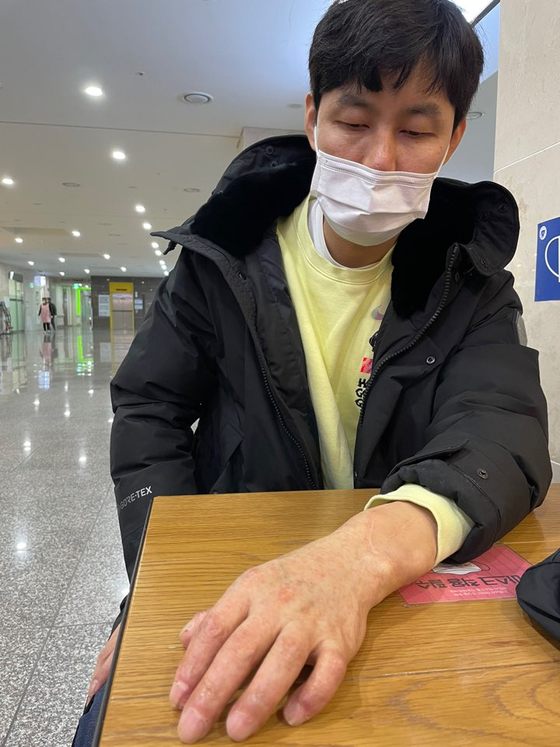 
Son Jin-wook, 40, has no trouble lifting his baby daughter with his two hands — one of which he received in transplant surgery four years ago.

It was the first successful hand transplant in Korea.

Son recollected his experience to the JoongAng Ilbo last Thursday, New Year’s Eve, during a visit to the Daegu Catholic University Hospital for a check-up for his baby daughter.

Son lost his left hand and around 10 centimeters of his lower arm in an accident at a factory in 2015. He is left-handed. After the accident, he used a prosthetic hand.

In February 2017, doctors from Daegu W Hospital, which specializes in hand and orthopedic surgery, and Yeungnam University Medical Center performed the transplant operation. It was a complicated surgery connecting multiple nerves, tendons, arteries and veins. The hand came from a brain-dead patient.

Son's life has drastically changed since. In the autumn of 2018, Son married his girlfriend. He also began working service jobs and in retail, something he couldn’t imagine doing before the transplant.

“January 2017, when I was hospitalized to receive an arm transplant, was the first beginning of my new life," Son told the newspaper. "In 2018, my marriage was the second beginning, and in 2020, my daughter was born so another new life as a father has begun. In 2021, I hope to live happily as a father to Ji-an, and gain more muscle on my arm.” 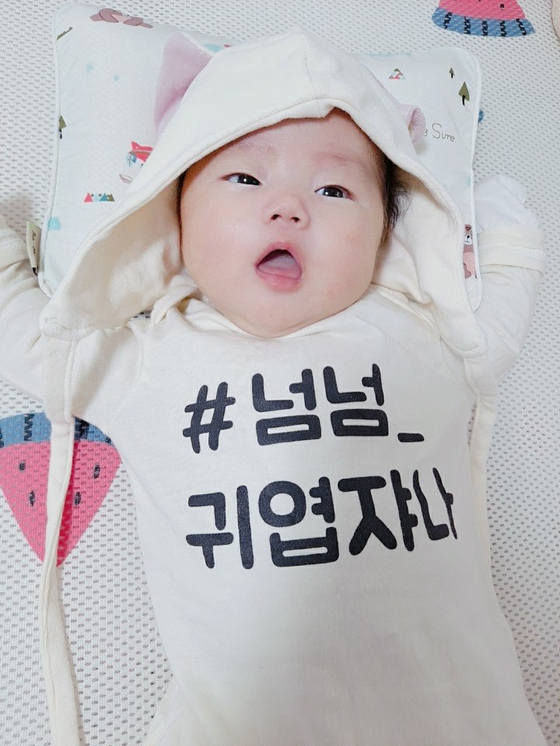 
Such aspirations were very distant to Son just a few years ago.

“When I had my disability, I envied those who could go to work and raise a child as ordinary parents,” said Son. “This new year is about achieving my dream of living ordinarily. It feels like all my worries disappeared after having Ji-an.”

Son said his body finally feels like it has “accepted” the transplanted hand. His arm has gained muscle mass. The skin color of his left hand now nearly matches his right, and his nails are growing normally.

Son is able to hold up to 20 kilograms (44 pounds) with his transplanted hand since last year, similar to what his right arm can do.

His left palm perspires more and is more sensitive to the heat and cold. He can move all five fingers and his left wrist freely. He has no problem carrying out daily chores including brushing his teeth, washing his hair and eating meals. He can shake hands with people. Driving is no problem.

Immediately after the surgery, he felt numbness and chills in his left hand, and had difficulty with delicate movements such as using a smartphone. Lifting heavy things was dangerous and difficult.

“Right after the surgery, I felt that my left hand was attached, but thought, 'It’s someone else’s, not mine.'”

His nerves recuperated after several months and with rehabilitation. In July 2017, Son, an avid baseball fan, had the honor of throwing the first pitch at a Samsung Lions game. 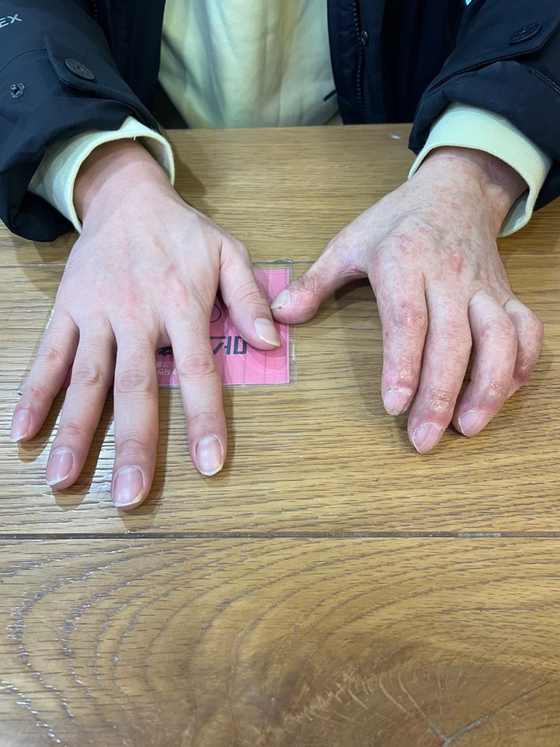 Son Jin-wook shows his left hand. He can now lift up to 20 kilograms (44 pounds) with that arm following his transplant surgery in 2017. [KIM YOUN-HO]


He went from visiting the hospital once or twice a month to once every two months. He has also decreased his intake of immunosuppressants.

Son’s successful hand transplant led to a revision of the organ transplant law in Korea, which legalized hands as transplantable organs in 2018. Son used to pay 1 million won ($924) per month for immunosuppressants, but that fell to 140,000 won after the revision to the law.

“Four years after receiving the surgery, I feel like ‘someone else’s arm’ has really become my arm,” he said.

He can even go fishing now.

“When I place the worm on the hook or move heavy fishing equipment with my left hand, I think, ‘Ah, my left hand is really mine.’”

Son has been in touch with another family struggling through a similar tragedy: one of its members lost an arm in an accident in Daegu. He has told the family, “You can’t lose courage,” and plans to meet them in person after the Covid-19 situation improves.

Son also regularly volunteers at centers for people with disabilities to provide help.

While many people considered 2020 a terrible year, Son had the best year of his life — thanks to many others.

“I hold in my heart the donor of my arm, the Daegu city government, the staff at W Hospital and Yeungnam University Medical Center and my parents who suffered through all this," he said. "And I hope to care for our neighbors and make my family happy in the New Year.”