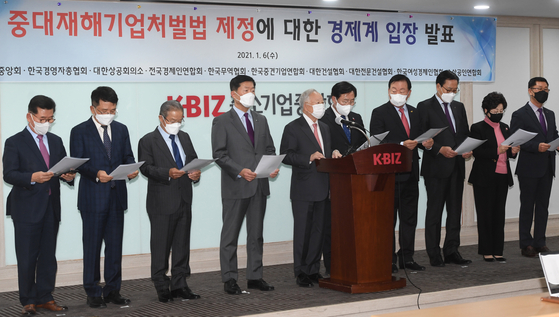 The heads of 10 business lobbying groups read out their stance against a bill that will place heavier responsibility on CEOs for workplace death and injury at the office of the Korea Federation of SMEs in Yeouido, western Seoul, on Wednesday. [YONHAP]


Business lobbying groups held an emergency meeting on Wednesday to protest a bill aimed at holding the heads of corporations accountable for workplace death and injury in a last-minute effort ahead of the planned passage of the legislation on Friday.

Ten associations — including the Korean Enterprises Federation, Korea Chamber of Commerce and Industry and Korea Federation of SMEs — appealed to lawmakers from both the ruling Democratic Party and the main opposition People Power Party as both parties’ floor leaders agreed on the legislation on Tuesday.

The latest version of the bill will impose at least a one-year prison sentence or a fine of less than 1 billion won ($922,000) on those at the helm of companies involved in industrial accidents caused by lax safety management.

The proposal is a step back from initial bills from both parties that suggested prison time of at least two years or a fine between 50 million won and 1 billion won, apparently in response to the outcry from the business community.

But the business associations said that the proposal still places an undue burden on the CEO of corporations alone, given that existing laws already punish the corporations for negligence.

“But they accepted only half of what we requested,” Sohn said, adding that the associations will continue to fight the legislation.

Kim Ki-mun, head of the Korea Federation of SMEs, claimed that smaller companies could take a hit from the bill.

“The heads of businesses are distraught to see such a bill being passed at a time when 66 percent of small enterprises suffered reduced sales last year due to the pandemic,” Kim said.

Delivery drivers to be forced to buy accident insurance