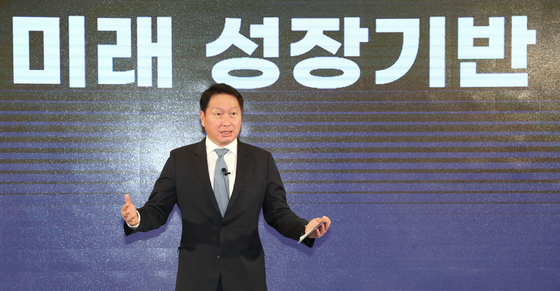 KCCI Chairman Chey Tae-won speaks during an event to celebrate his inauguration in central Seoul on Monday. [KCCI]


The new chief of Korea’s major business lobby group called on his Japanese counterpart to resume ties and regular exchanges.

The message came a day before his inauguration as chairman of the association on Monday.

A regular chairman-level meeting between the two group has not been held for four years since the court decision.

Chey expressed his “hopes to see the long-standing private-sector exchange and cooperation between Korea and Japan expand further,” adding that it would be “especially encouraging to resume the Korea-Japan Chamber Summit that last took place in 2017.”

Chey also delivered a statement to 130 other countries to highlight the role of business lobbies in fostering favorable business conditions in the pandemic-hit global economy.

“The current situation makes physical exchanges difficult, however there are a wide range of agendas ranging from trade to environmental and technological issues that Chambers of Commerce can work on through contactless means,” he said in the letter.

In the inauguration ceremony, he pledged to tackle doing business problems in Korea including hefty regulations.