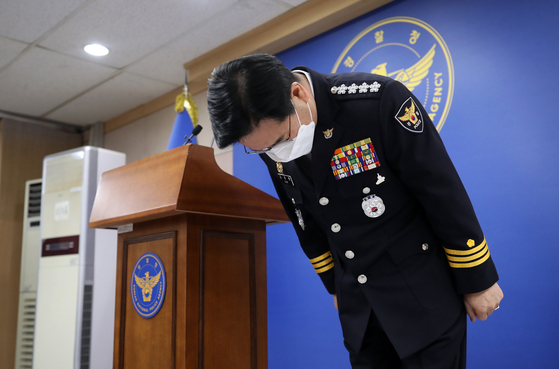 National Police Agency Commissioner General Kim Chang-yong offers an apology for the police's failure to prevent the death of a young child allegedly abused by her adoptive parents on Wednesday. [YONHAP]


The National Police Agency on Wednesday issued a public apology for its botched response to repeated reports of suspected child abuse that led to the death of a 16-month-old adopted girl.

“I am offering my deepest apology for having failed to protect the life of the child,” Commissioner General Kim Chang-yong of the National Police Agency said Wednesday in a media briefing.

Jeong-in died in October, just 271 days after she was adopted by a family in southwestern Seoul. She was allegedly abused for months, but the Yangcheon Police Precinct did not separate her from the family despite reports of suspected child abuse in May, June and September.

“As the highest person in charge of the police, I feel deeply responsible for the shortcomings in the initial responses and investigations,” Kim said. “Based on a thorough investigation of what had happened, we will prepare measures to prevent any recurrence of a similar incident and completely overhaul the police’s response system to child abuse.”

Kim said the Yangcheon Police Precinct chief, Senior Superintendent Lee Hwa-seop, was removed from his post to hold him accountable for his teams’ failures in the case. “His successor will be a senior superintendent from the Seoul Metropolitan Police Agency specializing in women and youth cases.”

Kim said the police are taking the tragedy seriously. “We will hold the responsible people accountable and punish them seriously to convince the public. We will improve our efforts to protect the weak in our society,” he said.

An investigative report on Jeong-in’s death aired by SBS last Saturday has fueled public outrage. She died on Oct. 13, 2020 at a hospital in Mok-dong, Yangcheon District. Her body was bruised, many bones were fractured and her pancreas was ruptured. A hospital worker reported suspected child abuse to the police following her death. The prosecution later indicted the adoptive mother for involuntary manslaughter by child abuse and the father for negligence.

Earlier Wednesday, a civic group filed a criminal complaint with the prosecution against Yangcheon Police chief Lee for negligence. The conservative People’s Livelihood Countermeasure Group complained that Lee was let off the hook while police officers under his supervision only received warnings despite their failure to protect the girl.

While Lee issued no official apology, he told the JoongAng Ilbo in an interview Tuesday that, “No words can justify what happened. It is ultimately my responsibility.”

A petition was posted on the Blue House’s public petition board on Monday calling for Lee to be fired for negligence. The petition received nearly 260,000 signatures as of Wednesday. The Blue House responds to petitions that receive more than 200,000 signatures.

Public demands are also growing for the adoptive parents to be charged with murder. The Korean Pediatric Society submitted an official opinion to the Seoul Southern District Prosecutors’ Office on Tuesday that the suspects should be indicted for murder.

“In our 74-page report, we made clear medical and objective grounds to show why Jeong-in’s death was murder, not involuntary manslaughter,” said Dr. Lim Hyun-taek, president of the Korean Pediatric Society. “The people who committed this outrageous crime must face the punishment they deserve.”

The Seoul Southern District Court, which will try the adoptive mother’s case, received over 700 petitions from the general public that the suspect should receive maximum punishment.

The court said Judge Shin Hyeok-jae, who will preside over the case, will not read the petitions until the end of her trial. “There is concern that the letters can influence the judge’s decision,” a court official said.

Meanwhile, the Holt Children’s Services, an agency that arranged Jeong-in’s adoption, issued an apology Wednesday. It, however, denied criticism that it failed to follow up on the child's situation after she was adopted.

According to the agency, it made three house visits, including two made immediately after child abuse reports in May and June, and asked the adoptive parents to take better care of the child. The agency also said it made multiple phone calls to the adoptive mother, requesting another visit in September, but was rejected.

The agency said it had no investigative power or legal authority to separate the child from the family. It requested the Gangseo Child Protection Center, which has investigative power, to launch a probe but no progress was made, it said.

The agency also rejected criticisms that it arranged the adoption despite the adoptive mother’s history of mental illness. It said she was treated once in 2017 without being more specific, and that piece of information was clearly stated in the adoption application to the family court. “The final decision was made by the court,” it said.

An opposition lawmaker said Wednesday that it was the nation’s social welfare system that failed to prevent child abuse, not an improper adoption process.

“Her tragic death is caused by a system that didn’t function even after three child abuse reports,” Rep. Kim Mi-ae of the People Power Party (PPP) said.

Kim adopted two children. Before entering the National Assembly, she was a lawyer specializing in cases involving those with disabiliities, adopted children and single mothers.

“According to government statistics, there are 70 children who died of abuse in 2018 and 2019. Of them, 60 were killed by biological parents, while nine were killed by step-parents and one by an adoptive family,” she said. “I want to ask the government what it was doing while these children were dying.”

Kim also condemned remarks by President Moon Jae-in, saying he was treating Jeong-in’s death as an adoption that had gone wrong.

“Moon ordered on Monday that the government needs to improve its oversight over the adoption process and a system must be created to investigate problems in adoptive families,” Kim said. “The president seems to have a bias that all adoptive parents are potential criminals.”