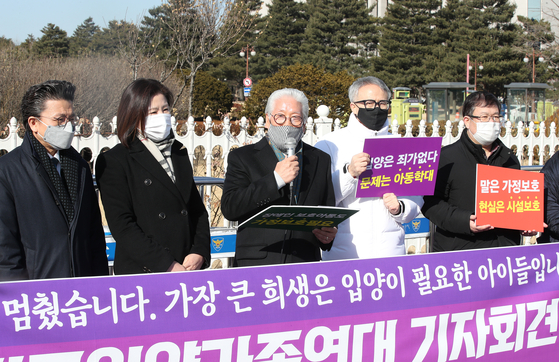 A coalition of adoptive parents and adoption activists criticizes President Moon Jae-in Tuesday in a press conference near the National Assembly for his remarks about allowing people to swap their adopted children if they fail to get along. [WOO SANG-JO]

A coalition of adoptive parents and adoption activists slammed President Moon Jae-in Tuesday for remarks about allowing people to swap their adopted children if they fail to get along, saying they could discourage people thinking about adopting.

In a press conference held near the National Assembly in Yeouido, western Seoul, representatives of the group, whose name roughly translates as the National Adoptive Families’ Coalition, also criticized the Blue House’s follow-up explanation of Moon’s remarks, calling it a “secondary attack” on adoptive parents-to-be.

The controversy began Monday as Moon was taking questions from Blue House correspondents in a New Year’s press conference. At one point, the topic turned to the October death of Jeong-in, a 16-month-old toddler who allegedly suffered physical abuse from her adoptive mother.

The case caught public attention only recently after a local broadcaster aired an investigative report on it.

Then came the contentious statements.

“There should be thorough research beforehand to find out if the parents are fit to adopt children […] and even after the adoption, the family should be checked on to see if the adoption is working out,” he said. “If it is not, then there should be measures to cancel the adoption. […] If the problem is that the parents don’t get along with the children, then they should be able to find ways to make it work, such as changing the adopted child.”

Moon’s comments provoked an immediate uproar online and among lawmakers of the main opposition People Power Party. The Blue House said Moon's words were taken out of context.

Kang Min-seok, Moon’s spokesperson, told reporters that the president was talking about policies on foster care, when to-be adoptive parents get to know their child for a few months before they decide to adopt. Korea has been running similar programs, but they haven’t been institutionalized yet and aren’t mandatory, Kang said.

The coalition of adoptive parents and adoption activists pointed out Tuesday that the foster care period is nothing like what Moon described.

“Most to-be adoptive parents going through foster care form stable relationships with their adoptees during the period,” the group said. “No parents give up on their children or treat them like something they can swap.”

The group says many parents who had made the difficult decision to adopt were backpedaling and changing their minds not to adopt after Moon's press conference.

The damage caused by Moon and his office is being felt by children whose adoptions have fallen through, the group contended.

In an MBC radio show Tuesday morning, Kang made his second attempt at damage control, stressing “nowhere in the president’s mind is there such thing as a ‘child refund.’” Some critics have denounced Moon for treating adoption as a kind of “shopping for a kid.”

A bill that was meant to institutionalize foster care programs in adoptions was introduced to the National Assembly in March 2017 by 11 lawmakers from the Democratic Party, but the bill failed to be put up for a vote. The Ministry of Justice, at the time, warned it could “create an atmosphere treating adoption as if it were ‘shopping for kids.'”