Korean Air has to clear one more hurdle in Asiana acquisition

Korean Air has to clear one more hurdle in Asiana acquisition 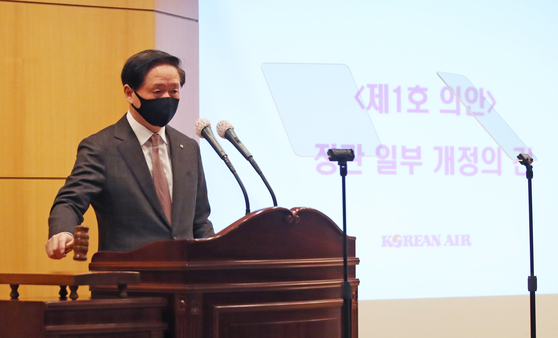 
Korean Air Lines has been challenged left and right as it tries to acquire Asiana Airlines, with angry major shareholders raising a litany of questions about the deal, which was first signed in November.


So far, the airline has managed to bust through the road blocks thrown in the way of the transaction and continues on course.

Earlier this week, the National Pension Service (NPS), the carrier's second largest shareholder, said it would challenge a resolution to change the airline's articles of incorporation so the number of shares issued could be increased, a move needed for the complex deal. The resolution passed.

In December, a court rejected a request by the largest shareholder of Hanjin KAL that would have scuttled the deal. Hanjin KAL owns 29.96 percent of Korean Air and needs funding from the Korean Development Bank to buy more stock in the airline. Korea Corporate Governance Improvement (KCGI) challenged the issuing of shares to the state-owned bank.

One major issue stands in the way of the Korean Air Lines's takeover of Asiana Air: Anti-trust regulators.

Korean Air Lines said it plans to file for the approval of the business combination in and outside of Korea by mid-January.

“The combined market share of Korean Air Lines and Asiana Airlines in terms of passenger slots at the Incheon International Airport is 38.5 percent, or 40 percent including cargo aircraft,” he said.

A recent report published by the National Assembly Research Service raises some questions.

According to Fair Trade Commission (FTC) regulations, a monopoly is created if a company meets three conditions: It has more than a 50-percent market share; it is a market leader; and it has a market share that is at least 25 percent higher than that of the runner-up.

But an exception could be made if Asiana Airlines is unable to survive on its own.

Asiana Airlines needs to prove that it is currently unable to pay off debts and that the situation won’t improve in the future.

“Several factors like capital impairment, operating loss and a matter of bankruptcy filing are taken into account, but there aren't exact standards,” said Lee Sung-kyu from the FTC's department of competition policy and economic development. “There also shouldn't be an alternative that creates less monopoly concern.”

That exception was made when the FTC greenlit Jeju Air’s acquisition of Eastar Jet, which has been struggling for years. Jeju Air, the largest budget carrier, was seen as the only alternative for Eastar Jet’s survival.

Despite concerns, the Korean Air Lines-Asiana Airlines business combination will likely get approvals both in and outside of Korea because air transport is an international business.

“Airlines compete against other international airlines on international routes,” said Professor Hur Hee-young, who teaches business at Korea Aerospace University. “There hasn't been a case when a merger and acquisition of airlines was denied on monopoly concerns. Most countries have one major airline, like Air France in France and Lufthansa in Germany.”

Hur added the Korean Air Lines acquisition of Asiana Airlines will not likely give the integrated airline major price-setting power for domestic routes because of the fierce competition amongst budget carriers and KTX, an alternative for domestic travel.