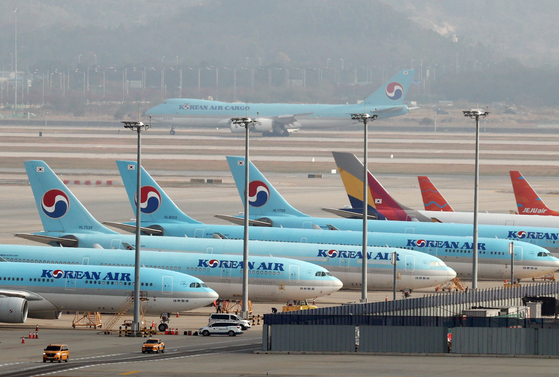 Korean Air's flights at Incheon International Airport in November. The merger with Asiana Airlines is expected to take longer as antitrust regulators in major flight destinations including EU and Japan has not yet reviewed the Korean airliner's application. [YONHAP]

The merger of Korea’s two leading airliners may take longer than expected with reviews by major countries including the EU, U.K. and Japan still not even scheduled.

The European Commission, U.K.’s Competition and Markets Authority and Japan’s Fair Trade Commission have not yet started reviews of Korean Air’s takeover of Asiana, apparently because they haven't received the documents they need.

Korean Air has submitted documents to antitrust agencies in 14 countries since January.

Most important are eight countries to which Korean Air and Asiana have their main routes: the U.S., EU, China, Japan, Vietnam, Turkey, Taiwan and Thailand.

Without approval from regulators in those countries, the newly merged entity won’t be able to operate its routes even if the Korean Fair Trade Commission greenlights the merger.

Malaysia and the Philippines have also approved.

It has been reported that Chinese authorities accepted the application submitted by Korean Air but returned it for an undisclosed reason.

Korean Air resubmitted it to Chinese authorities but it is not known when a decision can be expected.

The Korean Fair Trade Commission was hoping to finish the merger approvals by the end of this year.

Due to the delays, Korean Air pushed back its date for acquiring a majority stake in Asiana Airlines from last June to the end of this month.

In November 2020, Korean Air announced it would acquire the debt-laden Asiana Airlines.

The delays are raising worries among Asiana Airlines’ employees.

Half of its employees are on involuntary leaves and earning half usual pay.

One of the key issues is the market dominance of Korea’s biggest airlines.

It has been estimated that there will be 32 routes in which the newly merged entity would have more than a 50 percent market share.

Some analysts think Korean Air needs to give up some routes to get approvals.

In Korea, that decision is made by the government regulators, but in other countries, it is up to the companies to voluntarily make adjustments to reduce their market dominance.

Korean Air argues that if Korea's FTC makes a decision on its flight routes, it would help speed up the process with foreign regulators.

“It’s not easy for us to give up our rights on our own as we have promised to keep the current number of Asiana employees after the merger,” said a Korean Air official.