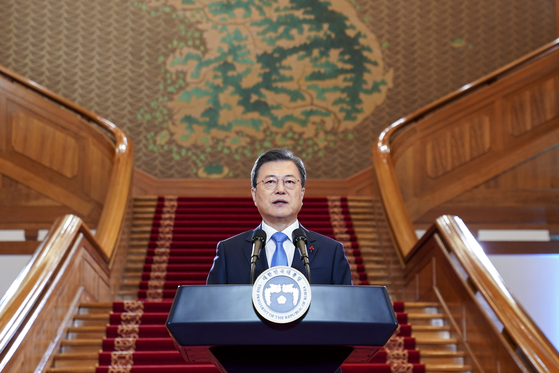 
President Moon Jae-in on Monday apologized for his administration’s failure to stabilize real estate prices for the first time.

In a New Year’s address, Moon apologized to the nation for skyrocketing prices to buy or rent homes.

"It is truly regrettable that housing-related hardships have immensely disappointed the people," Moon said. "We will never hesitate to devise measures necessary to stabilize housing. In particular, with a focus on expanding supply, we will quickly work out various housing supply plans that can take effect immediately."

It was the first time Moon admitted the failure of his government’s 24 sets of real estate cooling-off measures. Since he took office in May 2017, the median purchase price of an apartment in Seoul rose from 606.35 million won ($553,000) to 947.41 million won in December 2020, or 56 percent, according to KB Kookmin Bank's real estate information system.

Moon’s promise to increase housing supplies is a departure from the administration’s policy of penalizing owners of multiple properties with higher taxes and discouraging purchases by stiffer loan regulations. The opposition and analysts have urged the government to increase supplies.

When he had a town hall-style meeting in November 2019, Moon claimed real estate prices nationwide had been stabilized, stressing, “I want to say my administration is confident about real estate issues.”

In a New Year address last year, Moon vowed, “I will never lose this war against real estate speculators.”

Moon's approval ratings have taken a nosedive. He replaced Land Minister Kim Hyun-mee in December and ordered her successor, Byeon Chang-heum, to create a supply plan. Byeon said he would prepare a blueprint before the Lunar New Year holiday in February.

In an address aired live from the Blue House, Moon praised his administration’s efforts to fight the Covid-19 pandemic and promised to boost the economy. North Korea was briefly mentioned, while he avoided sensitive political topics.

“A fast, resilient recovery will be achieved on the economic front as well,” Moon said, promising that the economy will return to its pre-pandemic level during the first half of this year.

“The end of the dark tunnel is now finally in sight,” Moon said. “As uncertainties have largely dissipated, we are now able to plan based on predictions and forecasts.” Moon said the government will quickly spend more and speed up public and private sector investment projects worth 110 trillion won.

Moon also promised to spend most of this year’s 30.5-trillion-won budget on employment issues during the first quarter and directly hire 1.04 million youngsters, elderly and disabled people.

The president reiterated the government’s plan to support newly emerging industries to cope with rapid changes in the global economy such as digital innovation and to so-called fourth industrial revolution. He reiterated his push for a Korean-style New Deal concentrated on digital and environmentally friendly projects.

Moon said he will present a specific road map to realize a carbon-free economy by 2050. The country will prepare for a P4G summit in Seoul in May, he said. P4G stands for Partnering for Green Growth and the Global Goals 2030, a public-private initiative to tackle climate change and other sustainable development challenges. It involves 11 other partner countries: Bangladesh, Chile, Colombia, Denmark, Ethiopia, Indonesia, Kenya, Mexico, the Netherlands, South Africa and Vietnam. Korea was scheduled to host the international summit last June, but postponed the event due to the pandemic.

Efforts to boost the country’s so-called soft power in culture, arts and sports were also promised.

While devoting most parts of his speech to the economy, Moon made brief mentions of North Korea.

"The government will strengthen the [Korea]-U.S. alliance in step with the launch of the [Joe] Biden Administration. At the same time, we will make our final effort to achieve a major breakthrough in the stalled North Korea-U.S. talks and inter-Korean dialogue," Moon said.

He said the South was willing to talk with the North anytime, anywhere, even proposing videoconference dialogue. The proposal was made despite North Korean leader Kim Jong-un’s renewed nuclear threats during a ruling Workers’ Party congress.

Moon said cooperation between the two Koreas in health and disease prevention could be a first step to restoring inter-Korean relations.

Conspicuously missing was any mention of political issues, including the idea of special pardons for his two predecessors, Lee Myung-bak and Park Geun-hye. DP Chairman Lee Nak-yon said last week that he would propose to Moon at an appropriate time to pardon the two former presidents, but Moon made no mention of their fates. Lee was convicted in October by the Supreme Court of embezzlement and taking bribes from a conglomerate and sentenced to 17 years in prison. Park’s Supreme Court sentencing for her alleged abuse of power and taking bribes is scheduled for Thursday.

While the ruling DP pledged to support Moon’s promises in the New Year’s address, the opposition People Power Party (PPP) criticized the president for a lackluster speech.

“Looking back on how Moon has run the country for the past four years, I am skeptical that the vision presented today will be realized,” said Rep. Bae June-young, a PPP spokesman. He said all the accomplishments Moon mentioned in his speech were achieved by sacrifices by Korean companies and people, not the government.

Rep. Choi Hyung-du, another PPP spokesman, deplored Moon’s proposal to the North. “How can we shake hands with the North and sit down for talks, when it is brandishing a nuclear fist at us?” he asked.

All up to Moon