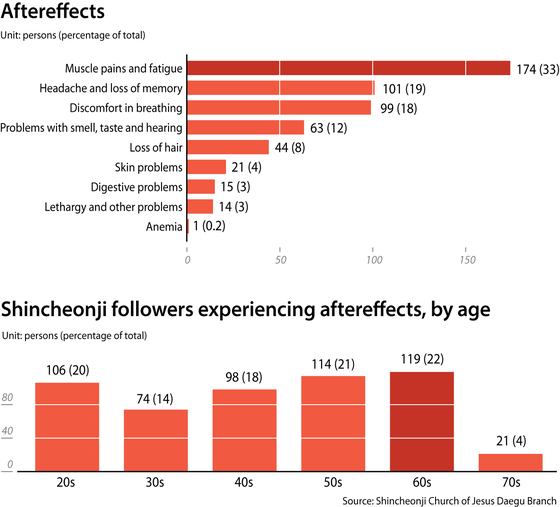 Hundreds of recovered Covid-19 patients are reporting continuing aftereffects, such as constantly smelling smoke, hair falling out and muscle pains.

The JoongAng Ilbo surveyed 4,198 members of the Shincheonji Church of Jesus who survived Covid-19 and found that at least 12 percent of them, or 532, reported aftereffects.

The religious sect was the early epicenter of the Covid-19 outbreak in Korea last spring. It was responsible for a cluster of over 5,000 cases among believers and their contacts, mostly in Daegu and North Gyeongsang.

Korea has yet to do a nationwide survey on the aftereffects of Covid-19. The JoongAng Ilbo said it reached out to the recovered followers of the Shincheonji Church of Jesus since they were easily contacted through the internal network of the sect.

One of the most common aftereffects reported by the survivors was a damaged sense of smell.

“I kept smelling smoke in the air, so I would go ask my neighbor if they were smoking in the house,” a 44-year-old former patient told the JoongAng Ilbo. “I asked them so often that we almost got into a fight. The hospital told me that I may have problems with my sense of smell but they can’t seem to fix it.”

Another Shincheonji adherent, a 26-year-old woman who tested positive in March 2020 and recovered in the same month, reported the same aftereffect.

“I would check the kitchen so often because I kept smelling something burning,” she told the JoongAng Ilbo. “In addition to the problem with smell, I’ve also been suffering from esophageal and nasal inflammation and allergic reactions since my recovery.”

The other most common aftereffect was loss of hair.

“It keeps falling out,” said a 73-year-old woman who recovered from Covid-19. “After showers, the bathroom floor is covered in my hair.”

A 60-year-old woman who tested positive in February 2020 and recovered by March, told the JoongAng Ilbo that she has been experiencing heavy hair loss since her recovery.

A 44-year-old man told the paper he experienced hair loss and muscle problems in his thigh.

“I think it is part of the aftereffect of the Covid-19 infection but the doctors can’t do much about it,” he said. “I’ve just been taking some oriental medicine to find a cure myself.”

Amongst those experiencing aftereffects, a majority, or 43 percent, were in their 50s and 60s.

Min Bok-gi, head of the Covid-19 response team at the Daegu Medical Association, said that the aftereffects reported by many Shiincheonji followers are echoed in reports from abroad.

“Hair loss has been an aftereffect experienced especially by middle-aged women who have been infected with Covid-19 in other parts of the world,” Min said. “Other aftereffects experienced abroad include loss of smell and taste and skin problems.”

“It is time for the Korean government to conduct a nationwide survey of recovered Covid-19 patients to see what kinds of aftereffects they may be experiencing,” said Jung Ki-suck, a professor of pulmonary, allergy and critical care medicine at Hallym University College of Medicine and former head of the Korea Disease Control and Prevention Agency. “The aftereffects will not be limited to the respiratory system of the body.”