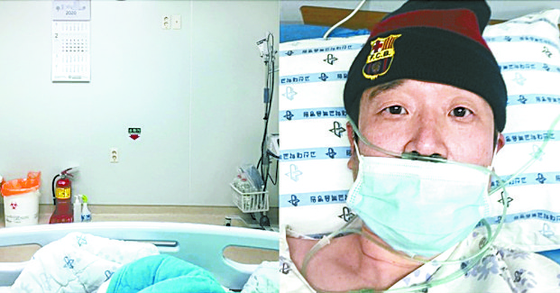 Park Hyun, a visiting professor at Pusan National University’s School of Mechanical Engineering, shares a photo taken in March of his Covid-19 recovery process in May on Facebook. Despite being cleared of the virus, he says he is suffering aftereffects to this day. [FACEBOOK]

It’s been over 160 days since Park Hyun beat his coronavirus infection, but the 48-year-old professor says he still struggles with the sometimes debilitating aftereffects.

“I have been declared fully recovered from Covid-19, but my body is not my body,” said Park, a visiting professor at Pusan National University’s School of Mechanical Engineering. “Symptoms that I am experiencing for the first time continue to appear."

A professor at Ramon Llull University’s School of Management in Barcelona, Spain, Park flew to Korea in February for a teaching gig at the university in Busan.

But he soon tested positive for Covid-19, becoming Busan’s Patient No. 47.

Health authorities determined that Park was virus-free by March, one month after he tested positive. But he described a multitude of long-lasting symptoms that followed in the virus’s wake: brain fog; heartburn and abdominal pain; skin conditions including a purplish tone and dryness; and chronic fatigue.

“Each day I was being treated for Covid-19 was like riding a roller coaster, with symptoms improving then worsening, and this hasn’t changed, even now,” Park said.

He has been using social media to describe his coronavirus recovery process, both in English and Korean, and said there is still insufficient information about Covid-19 in Korea. He goes by the username Busan47 on Facebook.

His post Monday on the aftereffects of Covid-19 drew more than 1,200 shares so far, with many commenters thanking him for sharing his experience. He outlined five major symptoms he has been suffering from, including brain fog, a term used to describe memory problems, a lack of mental clarity and the inability to focus.

Park also continues to suffer from on-and-off chest pain, he added, and recently his skin tone has taken a purplish hue, with violet specks, which could indicate blood vessel-related issues.

Park said that because his post-virus condition had been so poor, he called the 1339 hotline, the Korea Center for Disease Control & Prevention’s (KCDC) call center.

“They were annoyed, and I was told that it was cold symptoms,” said Park. “I was not able to receive any help through the KCDC hotline, nor through visits to various hospitals.”

Park said that through Facebook comments, he found two people who suffered from similar symptoms as him and reached out.

“They also were unable to receive information they needed from the KCDC,” he said. “Though five months have passed since I was determined fully recovered, I am not fully recovered at all.”

He pointed out that the U.S. and Chinese health authorities, as well as American, British and Italian media, have covered patients suffering from aftereffects.

“That is not the case in Korea,” he said.

Park suggests the use of more accurate terminology related to Covid-19 in Korea. He recommends rather than the commonly used “confirmed cases," it should be “patients,” and that rather than “fully recovered,” former patients should only be described as “recovered.”

He argued that the term “fully recovered” is misleading, giving people the sense that Covid-19 is over with completely and undermines its severity by making it seem like recovery from a common cold.

Park also weighed in on the recent spike in infections stemming from church-related clusters in the Seoul metropolitan area.

“When I go out these days, I see quite a lot of people not wearing masks,” he said. “I feel like they are tricked by the term ‘fully recovered’ and do not realize that there are many recovered patients suffering from mid- to long-term aftereffects.”

When asked what impression Covid-19 has left on him, Park replied, “It simultaneously gives me hope and despair.”

He said that his condition is not improving, and he is considering taking time off from teaching, as he finds it difficult to give lectures.

Park has been holding online lectures during the past semester, despite symptoms he said have hindered his ability to teach.

“As my condition is not improving, I am at the point of not being able to give lectures anymore,” said Park. “I have been thinking I have no choice but to give up on everything that I have built up.”

“The best thing is not to get infected,” Park said. “My hope is to prevent myself from entering a state of despair.”

Manufacturers are starting to feel optimistic