Short selling rules issued as the practice is again allowed

Short selling rules issued as the practice is again allowed 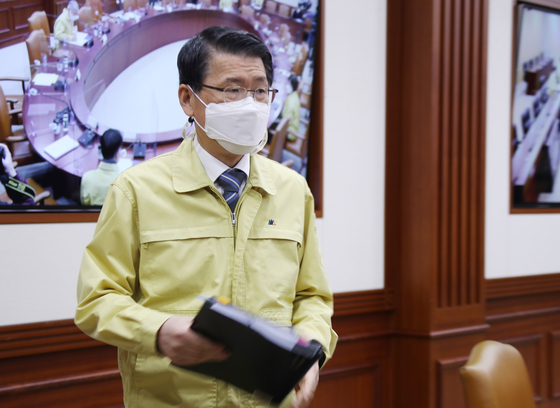 Financial Services Commission Chairman Eun Sung-soo attends a government's economic meeting at the government complex in Seoul on Jan. 13. The FSC has laid out punitive actions against short selling, whose ban is lifted in March. [YONHAP]


Investors will face fines of up to 500 million won ($455,000) if they participate in the capital increase of a company they have shorted, while they will have to maintain records on short sales for five years.

After announcing that short selling would again be allowed from March 15, the Financial Services Commission (FSC) on Wednesday rolled out a series of measures designed to prevent abusive strategies related to the practice.

Proponents say it improves liquidity and price discovery and takes the edge off of bubbles. Critics contend that it drives down prices.

According to the FSC, the punitive measures are to prevent investors from profiting by lowering the value of a company by short selling and then buying the stock of that same company on the cheap when it seeks to raise capital.

Naked short selling, when investors sell short without even borrowing the stock in the first place, will also be targeted by the authorities.

All short selling information, including the amount of order, the date on which the short selling contract was made and the commission, have to be retained for five years. This includes orders made via mobile messengers such as Kakao Talk and by e-mail.

Individuals violating the mandatory storage of information rule will face fines of up to 30 million won, and businesses 60 million won.

In March 2020, the government banned all short selling, as it was seen contributing to declines in stock prices.

The Kospi, which fell to 1,400 due to the economic impact of the pandemic last year, quickly recovered and has since broken 3,000.