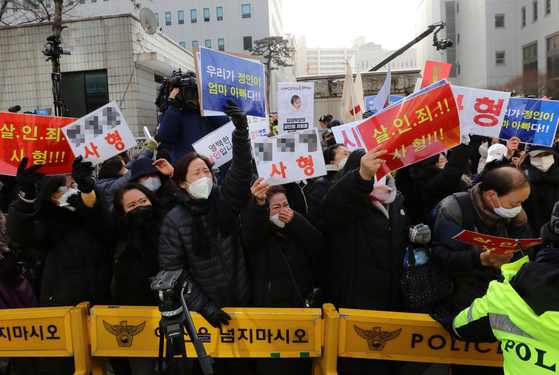 
The adoptive mother of a 16-month-old who died after being brutally abused was due in court Wednesday, and angry members of the public were waiting for her.

“Murderer!” yelled a woman as the adoptive mother, a 35-year-old woman surnamed Jang, exited the Seoul Southern District Court Wednesday after the first hearing in her murder trial.

A man threw a snowball at the bus Jang boarded to her detention center. More people surrounded it, kicking and banging it with their hands. Throngs of people lined the court’s gate with placards demanding a death sentence for Jang.

Jang's adopted daughter Jeong-in died on Oct. 13, 2020, at a hospital in Mok-dong, Yangcheon District. Her body was bruised, many bones were fractured and her pancreas was ruptured. A hospital worker reported suspected child abuse to the police following her death and Jang was arrested in November. The opening of her trial was set for Wednesday several weeks ago.

The case came to widespread public attention after an investigative report was broadcast by SBS on Jan. 2.

Additional reporting on the short, sad life of Jeong-in has followed from different media outlets. A report by TV Chosun included CCTV footage taken from last August of Jeong-in being treated very roughly in an elevator of the building where her adoptive father works.

In the footage, Jeong-in is seen sitting in a stroller that is pushed so violently by Jang that she rocks to and fro and her head nearly bangs on the front handle of the stroller.

The state initially indicted Jang for involuntary manslaughter in December, but raised the charge to murder on Wednesday after receiving additional test results on Jeong-in, including additional expert analysis of her autopsy results. That analysis emphasized the indications of severe physical abuse. Prosecutors suspect that Jang hit Jeong-in in the stomach and placed her on the ground and stepped hard on her stomach several times.

“In addition to signs on the body pointing to severe physical abuse, we have also found indications during questioning of the adoptive mother that she may have continued the abuse with the realization that it could kill Jeong-in,” the prosecution said in a statement Wednesday.

Jang told prosecutors under questioning that she did punch Jeong-in in the stomach when she refused to eat, but denied using “a force that could rupture her organs.”

She admitted dropping Jeong-in after shaking her in the air on the day she died.

Prosecutors Wednesday asked the court to consider a charge of murder first, and then a charge of involuntary manslaughter if murder can't be proven.

In a press briefing on Wednesday, Jang’s lawyer denied both charges.

“[Jang] feels the anger of the public, but she didn’t mean to kill the girl,” the lawyer told the press. “She admits that she mistreated the girl on the day she died, but she doesn’t think that what she did killed the child.”

Jang is in a detention facility in Seoul.

Jang’s husband, a 37-year-old man surnamed Ahn, was indicted for child negligence but without detention. His trial also started on Wednesday in the same hearing.

When his car exited the court on Wednesday, an angry mob surrounded the vehicle, kicking the car and yelling loudly.

The hearing lasted a little over an hour on Wednesday. Over 800 people applied to attend, with only 50 seats in the courtroom due to Covid-19 restrictions. Some people watched it on monitors in other courtrooms.


The next hearing for Jeong-in’s adoptive parents is scheduled for Feb. 17.

Jeong-in was adopted in January 2020 by Jang and Ahn. Jang is an interpreter and Ahn works for a broadcasting company. The couple have a 4-year-old biological daughter.

When Jeong-in was adopted, she was seven months old and weighed 9 kilograms (19.8 pounds). When she died nine months later, she weighed 8 kilograms.

Commissioner of the National Policy Agency in Korea apologized earlier this month for the police failing to respond to reports of suspected abuse of Jeong-in last May, June and September.

The first report of suspected abuse was made to the Yangcheon Police Precinct last May by a day care center worker who found bruises on Jeong-in’s body. The parents told police they probably massaged the girl too hard, and the police closed the case.

In June, the police received a report that Jeong-in was left alone inside a parked car. In September, a pediatrician who treated Jeong-in reported suspected abuse to the police. In both instances, the police closed investigations by saying they could find no evidence and did not separate the child from the couple.

Husband confesses to murder of wife, two sons in Gwangmyeong