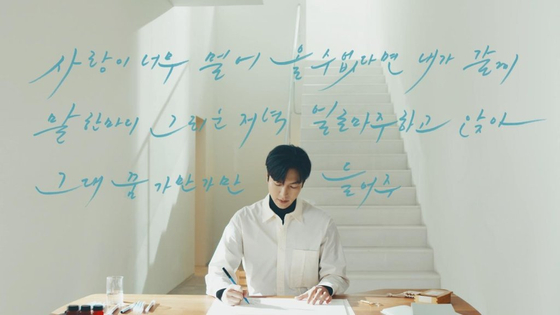 Lee, who is the institution’s promotional ambassador, explains in detail about hangul’s originality through calligraphy, fashion items with stiches of the alphabet patterns and furniture pieces inspired by the alphabet.

The video is available with subtitles in seven languages — English, Chinese, Spanish, Arabic, French, Vietnamese and Indonesian — to be displayed in King Sejong Institutes located across 76 nations.

“I know that K-content is receiving worldwide recognition and since I am so loved by our foreign fans, I thought it was a good opportunity to spread the beauty of hangul,” Lee said in the video. “I hope more people can get to know the alphabet and Korea through the institution.”

Since debuting through the mega-popular KBS drama series “Boys over Flowers” (2009), Lee has amassed a wide array of global fans through his television successes, such as SBS drama series “The Heirs” (2013) and “The Legend of the Blue Seas” (2016). He’s been active as the promotional envoy of the foundation since 2019.