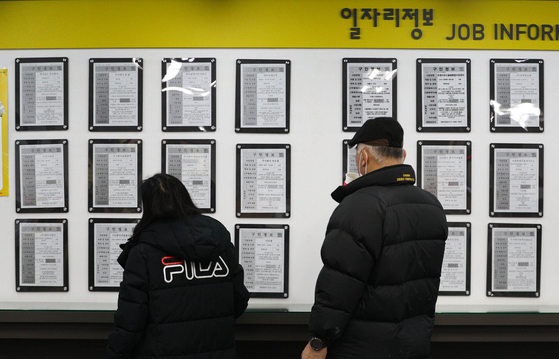 People looking at a job bulletin board at an employment and welfare center in Mapo District, western Seoul on Jan. 13. [NEWS1]


In the pandemic-hit job market, job losses are not the only issue — more Koreans are now barely making ends meet as part-time workers.

According to Statistics Korea on Thursday, the number of people who worked less than 36 hours a week hit 5.96 million last year, up 10.3 percent, or 554,000 people, compared to the previous year. This is the largest figure since the statistics agency started compiling related data in 1983.

Working 36 hours a week — about seven to eight hours per day — constitutes a full-time job.

Last year, roughly 1.9 million people worked between one to 17 hours per week — or less than four hours a day. That’s a 4.4-percent increase compared to a year earlier. Some 4.06 million worked between 18 hours to 35 hours a week, up 13.2 percent year-on-year.

Meanwhile, the number of people who worked 36 hours or more per week last year was about 20.1 million, down 5.6 percent compared to a year ago. That’s the largest on-year drop in 22 years since the IMF crisis of the late 1990s.

Last year, Korean workers on average worked 39 hours per week, the first time it fell below the 40-hour mark since the statistics agency started collecting related data in 1983. This also means more people worked as part-time workers and more people earned less money than they used to. That’s mainly because of the expansion of the contract employment system in the public sector under the Moon Jae-in administration.

“The sharp increase in the number of workers who work less than 36 hours a week signals a message that the quality of jobs has been worsening,” said Yoon Dong-yeol, a business professor at Konkuk University. “At this rate, the situation will be worse this year.”

The numbers of “discouraged workers” — people who could work but have given up searching for a job for one year — and people who said they are just “resting” both hit new records last year.

That’s the largest figure, as well as the largest on-year growth since 2003 when the statistics agency started compiling related data.

The number of discouraged workers and people who rested totaled about three million. In 2016, the number was only about 2.08 million, but increased by some 903,000 during the three years under the Moon administration.

Youths have been hardest hit. With companies reducing the number of new hires, students who just graduated from universities have nowhere to go but part-time jobs or contract jobs.

“If youths who lost job opportunities enter the workforce late, it will widen the gap between the rich and poor, as well as possibly affect the marriage and birth rate in negative ways,” said Kang Sung-jin, an economics professor at Korea University. “As quality jobs come from companies, [the government] must ease regulations so that companies can easily jump into new businesses and hire more.”