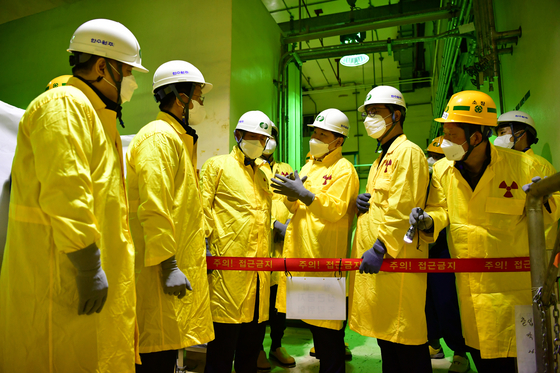 Lawmakers from the opposition People Power Party check the authenticity of the ruling party’s claim of alleged leaks of radioactive tritium from a nuclear power plant in North Gyeongsang on Jan. 14. [YONHAP]

German sociologist Ulrich Beck (1944-2015) argued in his 1986 book “Risk Society” that modern risk should be distinguished from past danger. To Beck, a natural disaster like a wildfire is a danger of the past. The danger can be perceived visibly and clearly. Meanwhile, fine dust is a modern risk. As it is not visible, it is impossible to measure its levels without special equipment. It is also hard to calculate the damage. Deaths from fine dust can only be estimated with probability. Beck predicted that modern risks like fine dust will increase as science and technology develops.

Beck regarded modern risk as a “universal and manufactured risk.” As he argued, risk transcends borders in modern society. Fine dust originates from Chinese factories and rides on the westerly wind to the Korean Peninsula.

Modern risk is amplified through political and social events, while a past danger stands on its own. A notable example is the mad cow disease protests in 2008. Protests were kicked off by female middle school students’ fandom culture and exploded by some civic groups. As the size of the protests grew, people’s awareness of mad cow disease increased. In the process, mad cow disease was even compared to cyanide. After the dormant period of 10 years has passed, however, no death from mad cow disease has been reported in Korea.

Politics works as a concave lens to amplify risk. Facts based on science are easily ignored as they go through the lens of politics. The ruling Democratic Party (DP) is raising the issue of the Wolseong-1 nuclear reactor’s tritium. A DP lawmaker claimed that tritium was released from the reactor unwittingly. DP Chairman Lee Nak-yon said that collusion with a nuclear reactor mafia should be clarified. But tritium leaks over the permitted level outside the nuclear reactor have been confirmed.

According to the nuclear energy Wiki by Seoul National University’s Nuclear Energy Police Center, tritium is a radioactive isotope emitting weak radiation. If released to the environment and consumed, it can emit radiation for an extended period of time and cause mutations or cancer, and the consumption amount is strictly regulated in many countries. As the biological half-life of hydrogen in water is 12 days, half of the tritium absorbed by the human body is discharged after 12 days.

The release of tritium will be confirmed soon. We should be wary of the manufactured risk and the forces who seek to balloon that risk.

Thief in the night