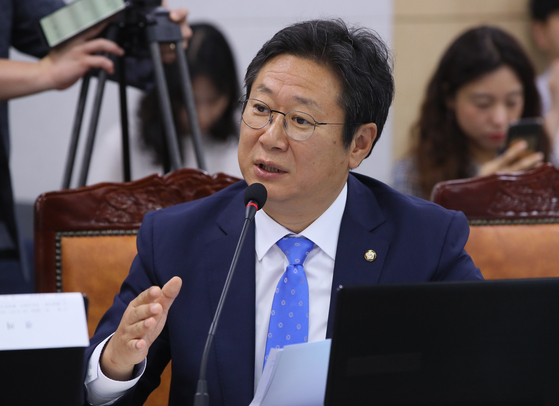 In this file photo, Rep. Hwang Hee of the Democratic Party (DP) speaks at the Land, Infrastructure and Transport Committee's audit of the Land Ministry on Oct. 2, 2019. President Moon Jae-in named Hwang as minister of culture, sports and tourism on Wednesday. [YONHAP]

Rep. Hwang Hee of the Democratic Party (DP) was named minister of culture, sports and tourism and Rep. Kwon Chil-seung as minister of SMEs and Startups. 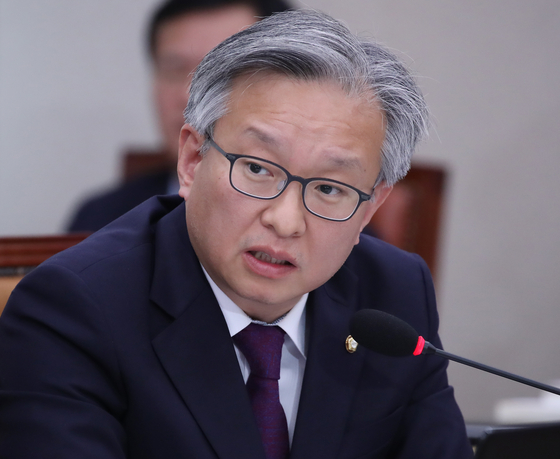 In this file photo, Rep. Kwon Chil-seung of the DP speaks at the National Assembly on Nov. 10, 2017. President Moon Jae-in named Kwon as the minister of SMEs and startups on Wednesday. [YONHAP]


Hwang is a two-term lawmaker with expertise in urban planning. The Blue House said Moon selected Hwang despite his lack of experience in the field of culture, sports and tourism and because of his policymaking and communication skills.

Hwang, a longtime supporter and strategist of Moon, had served as a bridge between the Blue House and the DP. He was a member of Moon’s special delegation to the United States shortly after Moon took office in May 2017.

Kwon, nominee to head the SMEs and Startups Ministry, is also a two-term lawmaker and is dedicated to issues concerning small- and medium-sized companies and start-ups, the Blue House said.

Kwon is replacing Park Young-sun, a former four-term lawmaker who served in the post since April 2019. Park is expected to run in the DP’s primary for the Seoul mayoral by-election.

Both Hwang and Kwon are members of a Moon loyalist group known as the “Owl Alliance.” The name came from the idea that its members will protect Moon day and night, like owls.

The group was organized by politicians who worked in the Roh Moo-hyun Blue House, where Moon served in various posts including presidential chief of staff. Although it started as a fraternity, the members' bonding became stronger after Moon lost the 2012 presidential election to Park Geun-hye.

After a list of 40 lawmaker members of the group was made public in August 2018, criticism snowballed that the fraternity was encouraging factionalism. The group publicly dismantled, but key members launched a new group, called the “Democracy 4.0 Research Institute” last month.

Rep. Jeon Hae-cheol, appointed as interior minister in December, and Rep. Park Beom-kye, nominated to head the Justice Ministry, are both members of the Owl Alliance. “Moon is sending a clear message that he won’t allow any leak of power at the end of his presidency,” a multi-term lawmaker from the DP said.

Through a series of three reshuffles, Moon replaced nine ministers in his cabinet. He increasingly chose DP lawmakers to fill the posts. Of the 18 ministers in the cabinet, two are incumbent DP lawmakers, and four nominees are also ruling party reps.

With the latest reshuffle, the number of Moon's women ministers has been reduced to three, far lower than his presidential pledge to have more than 30 percent of the cabinet occupied by women.

Moon’s decision to appoint Reps. Hwang and Kwon as ministers prompted criticism both from the ruling and opposition parties. “The latest appointments cannot avoid the criticism that Moon is practicing a spoils system,” said a DP lawmaker.

“The nominees to head the Culture Ministry and the SMEs Ministry are notable pro-Moon politicians who were members of the Owl Alliance,” said Rep. Yun Hee-suk, spokesman of the PPP. “It seems that ability and professional expertise are not grounds for appointments.”