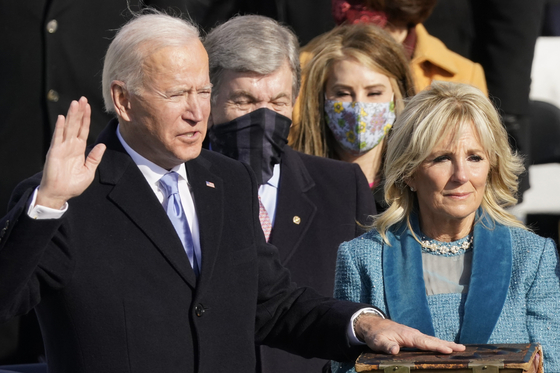 Joe Biden is sworn in as the 46th president of the United States by Chief Justice John Roberts, and his wife, Jill Biden, holds the Bible in the inauguration ceremony at the U.S. Capitol in Washington Wednesday. [UPI/YONHAP]

The message was delivered to Washington to mark Biden’s inauguration, and Moon said he hoped to meet Biden in person soon to “build friendship and trust and have candid conversations on issues of common interest,” according to Blue House spokesman Kang Min-seok.

Moon said that Biden’s continued message of unity and reconciliation “resonates with the American people” and that he looks forward to Biden’s leadership in such global challenges as Covid-19, climate change and economic instability.

“President Moon further emphasized that as an ironclad ally and trusted partner of the United States, Korea will always be on board with the Biden administration on its journey and will continue through unwavering coordination to strengthen the Korea-U.S. alliance and aim for peace and prosperity on the Korean Peninsula and in the region” Kim added.

Biden was sworn in Wednesday at the U.S. Capitol as the 46th president of the United States, replacing Donald Trump, while Kamala Harris became the first female vice president, as well as the first Black American and first person of South Asian descent to hold the position. 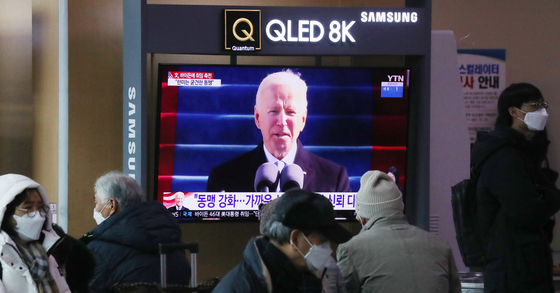 In a Twitter post Thursday, Moon wrote in an English message to Biden, “Congratulations on your inauguration.”

The tweet continued, “America is back. America's new beginning will make democracy even greater. Together with the Korean people, I stand by your journey toward 'America United.'"

He also elaborated in a tweet in Korean, “Korea always trusts in the American path to freedom, and as an ironclad ally, we will work together for peace and prosperity on the Korean Peninsula and in the region. We believe that the Korea-U.S. alliance will be further strengthened through cooperation on global issues such as health, security, economy and climate change.”

The post continued, “The United States definitely will astonish the world with ‘Build Back Better.’ Korea is on board with the Biden administration’s inauguration. Let’s go together!”

Biden in his inaugural address, which focused on a call for unity among Americans, reached out to U.S. allies and promised a return of American engagement, a contrast to his predecessor’s “America First” policy.

“We will repair our alliances and engage with the world once again,” said Biden. “And we’ll lead, not merely by the example of our power, but by the power of our example. We’ll be a strong and trusted partner for peace, progress and security.”

Biden already made good on his promise to rejoin the 2015 Paris climate agreement abandoned by the Trump administration by signing an executive order Wednesday recommitting to the international accord.

Choi Young-sam, the spokesman for the Korean Foreign Ministry, said in a press briefing in Seoul Thursday, “The Korean government welcomes President Biden's inaugural address expressing U.S. willingness to lead the international community with the power of example and strengthening alliances in particular.”

The Moon government is keen on reviving North-U.S. dialogue and inter-Korean cooperation to build on the denuclearization negotiations kicked off under the Trump administration and plans to convey this position to President Biden and his foreign affairs and security team.

However, Seoul has also been on the receiving end of the Trump administration’s extensive pressure to pay more for defense, among other matters, which have at times strained relations.

In his New Year’s press conference Monday, Moon said that he believes he is on the same wavelength on “multilateralism and alliance values” with the new Biden administration.

“The Korean Peninsula peace process is not a choice but a path that must be taken,” Moon said at a rare NSC meeting chaired by the president.

He ordered his aides to do their utmost to “find a breakthrough in North-U.S. and inter-Korean dialogue so that the clock winds toward peace again,” noting that denuclearization talks have been at an impasse since the failed North-U.S. summit in Hanoi, Vietnam, in February 2019.

Moon added that he will “closely cooperate with the new Biden administration to make progress in the Korean Peninsula peace process.” 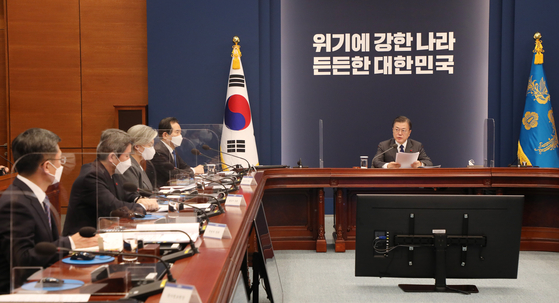