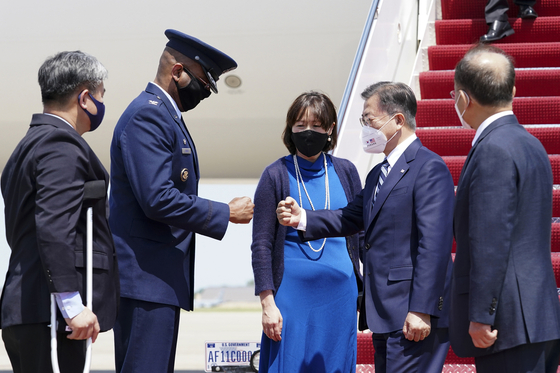 President Moon Jae-in, right, bumps fists with U.S. Col. Marcus Cooley, commander of the 89th Airlift Support Group, after arriving at Joint Base Andrews in Maryland on a presidential jet Wednesday. Moon kicked off his four-day trip to the United States for his first summit with U.S. President Joe Biden to be held at the White House Friday. [YONHAP]


The U.S. House of Representatives introduced a resolution Wednesday welcoming President Moon Jae-in and describing the Korea-U.S. alliance as a "linchpin" for peace and stability in the Indo-Pacific region.

The House Foreign Affairs Committee introduced the resolution, entitled "Recognizing the importance of the United States-Republic of Korea relationship to safeguarding peace, security, and prosperity on the Korean Peninsula, in the Indo-Pacific region, and beyond," on the eve of Moon's arrival in Washington for his first face-to-face summit with U.S. President Joe Biden Friday.

A group of bipartisan congressmen led by Democratic Rep. Gregory Meeks of New York, chairman of the House Foreign Affairs Committee, released a joint statement that read, "The U.S.-Republic of Korea alliance serves as the linchpin for ensuring peace, security, and stability in Northeast Asia and the wider Indo-Pacific region. Through our ironclad relationship rooted in our shared interests and values, we continue to closely coordinate on a broad range of regional and global issues."

The statement said the resolution was introduced to "welcome President Moon to the United States and underscore the importance of expanding cooperation" between the two countries, adding that the summit with Biden "is a clear signal that the U.S.-Korea alliance remains strong and effective."

The House resolution noted that mutual trust, shared values, intertwined economic interests, and generations of people-to-people ties "provides a foundation for one of the strongest, most interoperable, and dynamic bilateral alliances in the world."

The resolution recounted the history of Korea-U.S. relations dating back to the establishment of diplomatic ties on May 22, 1882, and the signing of the Mutual Defense Treaty on Oct. 1, 1953.

It also noted that the Armistice Agreement of July 27, 1953, which ended the 1950-53 Korean War in ceasefire, "has neither formally ended the Korean War nor constituted a permanent settlement of peace on the Korean Peninsula."

The bilateral alliance, it added, is critical for "close coordination to face the challenges posed by the Democratic People's Republic of Korea (DPRK)," North Korea's official name, and to address future security challenges.

The United States and South Korea, it said, are "committed to pursuing closely coordinated diplomatic efforts through a shared strategy to achieve the complete, verifiable, and irreversible denuclearization of North Korea and establishing peace on the Korean Peninsula." The "complete, verifiable, and irreversible denuclearization," or CVID, terminology has been used less frequently in recent years amid diplomatic outreach to Pyongyang.

In late April, the Biden administration announced it completed a review of North Korea policy and will pursue a "calibrated, practical approach" that is open to diplomacy with Pyongyang to achieve the "complete denuclearization" of the Korean Peninsula. Moon and Biden are expected to discuss the policy review during their summit.

It also called for continued cooperation between the two governments in the promotion of human rights, an issue prioritized by the Biden administration. Washington has been critical of Pyongyang's systematic and widespread abuses against its own people, and may urge Seoul to play a larger role on the human rights situation.

As Moon has prioritized coronavirus vaccine procurement for this visit, the House also committed to continuing and expanding medical, scientific and vaccine collaboration between South Korea and the United States, "particularly since cooperation between the two countries has saved countless lives" during the Covid–19 pandemic.

The resolution stressed three-way cooperation with Japan multiple times, noting that "a robust and effective trilateral relationship" between Seoul, Washington and Tokyo is "critical for joint security and interests in defending freedom and democracy, upholding human rights, promoting peace, security, and the rule of law in the Indo-Pacific and across the globe."

The House resolution reaffirmed the United States' extended deterrence commitments to South Korea. The Donald Trump administration had questioned the necessity of the U.S. nuclear umbrella over its allies, while the Biden government has been assuring its partners that "America is back."

On May 13, a bipartisan group of senators including Bob Menendez, a Democrat from New Jersey who chairs the Senate Foreign Relations Committee, introduced a similar resolution welcoming Moon and recognizing the importance of the bilateral alliance.

Moon, who arrived by presidential jet at the Joint Base Andrews in Maryland Wednesday, was scheduled to visit Capitol Hill for a meeting with House Speaker Nancy Pelosi and other U.S. lawmakers Thursday afternoon.

In a report on relations with South Korea released Tuesday, the U.S. Congressional Research Service (CRS) described Seoul as one of the Washington's "most important strategic and economic partners in Asia."

The talks with Moon on Friday will be the U.S. president's second in-person summit after one with Japanese Prime Minister Yoshihide Suga last month, which signals the Biden administration's "priority on the Indo-Pacific region and on reinvigorating U.S. alliances," according to the report.

It described Pyongyang as the "dominant strategic concern" in the Seoul-Washington relationship, noting that Moon "has championed U.S.- North Korea talks, which he views as critical to preventing military conflict and to realizing his goal of establishing a durable peace on the Korean Peninsula."

The CRS report pointed out that Moon's "preference for more aggressive engagement with North Korea could create tensions with the United States."

On relations with China, it noted that "Beijing has punished South Korean companies when it disagrees with Seoul's policy decisions," and that for such reasons, "South Korea generally tries to avoid antagonizing China."

It elaborated that the Moon administration "has taken an ambiguous stance on whether to cooperate with the Quadrilateral Security Dialogue," or Quad, the U.S.-led cooperative forum with India, Japan, and Australia.

The report stated that "Seoul's participation in Quad activities may be more likely" after the Biden administration "dropped the previous U.S. framing of the group as anti-Chinese" and pushed for new Quad initiatives such as Covid-19 vaccine distribution, combating climate change and critical technologies.

The report also noted that historical issues stemming from Japan's colonial rule and a trade spat have "caused South Korea-Japan relations to plummet," eroding trilateral policy coordination with the United States, and that the Biden administration has been working to "reverse this trend."