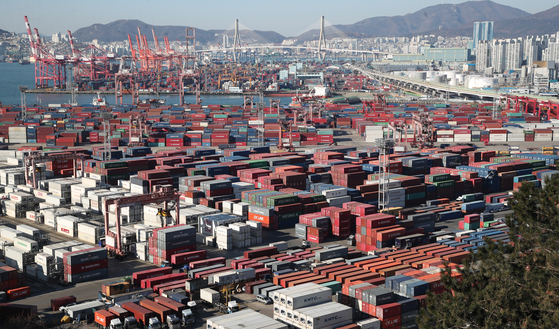 Biden’s initiative to achieve carbon neutrality by 2050 will be a primary driver of demand for renewable energy-related exports.

The president has made climate change front and center, and his first set of executive orders included a commitment to the 2015 Paris Agreement.

The report said that the generation of solar energy and wind power will account for 38 percent of the total energy output in the United States in 2050, citing statistics released by the U.S. Energy Information Administration.

Last year through November, the United States imported $8.16 billion of solar cells, a key component in the generation of solar energy. Of that, 11.5 percent was imported from Korea, the report said.

U.S. imports of structural steel, which is required in the building of wind turbine towers, were worth $860 million during the cited period, 12.4 percent of which was from Korea.

The EV business is expected to benefit as a result of the new administration's push toward zero-emission vehicles, leading to more imports of related cars, components and infrastructure.

Steady investment in the United States by battery makers will result in a steady supply of components from Korea, the report said.

“As most of the production of core components of batteries, such as cathodes, anodes, separation membranes and electrolytes, are domestically made, if the production of batteries should expand in the United States, imports of related core parts made from small and midsize enterprises in Korea should increase as well,” the KITA report said.

LG Energy Solution and SK Innovation have both built battery factories in the United States and have revealed plans to expand the facilities in the coming years.

Last year as of November, the United States imported $1.45 billion of EVs, 24.8 percent of which were from Korea. Japan accounted for 11.4 percent and China 7 percent.

Korea’s bio sector is also expected to experience an export boost to the United States during the Biden administration amid Covid-19 and the emphasis on public health care.

The U.S. import of medicines, masks, test kits and other health care products, materials and goods related to Covid-19 will continue to increase with the latest detection of variant infections and the delay in vaccine administration, the report said.

The United States imported $900 million worth of test kits and reagents last year, 12.4 percent of which were from Korea. China accounted for 30 percent and Japan 5.7 percent.

“As the Biden administration is emphasizing public health care also known as Obamacare, the process of reducing medicine prices is likely to lead to more demand for imports of overseas generics and biosimilars,” the report said.

Covid-19 will also lead to an accelerated digital transformation, leading to more demand for network equipment.

As the virus encourages more people to stay home, demand for home appliances and processed foods are also expected to increase, according to the association.

For example, $100 million of noodle products including ramyeon were imported by the United States last year as of November, an increase of 39.2 percent on year. Thirty-one percent of imported noodle products were from Korea.

“Support by the Korean government and the marketing strategies of businesses should focus on expanding the exports of the five sectors,” the report said.

“With intensifying competition from China, Japan and other countries, especially in the fields of EVs and semiconductors, Korea and the United States are in need of more cooperation to build a more stabilized trade environment.”