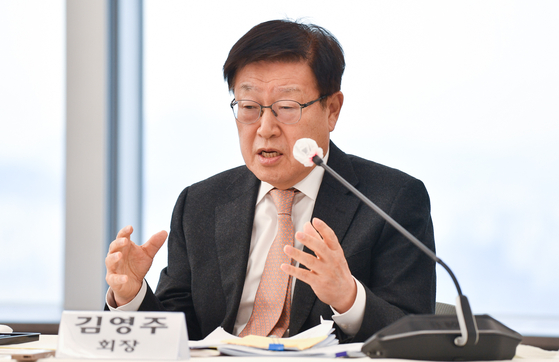 
Exports should grow 6 percent next year to reach $538.2 billion, according to the Korea International Trade Association (KITA) Wednesday, recovering from the Covid-19 pandemic and propelled by semiconductors, computers and bio pharmaceuticals.

Risks from the pandemic persist, but the trade organization sees signs of recovery in the global economy.

“The 6 percent growth rate is a conservative estimate based on what we’re seeing at the moment,” said KITA Chairman Kim Young-ju at a press event in Gangnam District, southern Seoul.

“Green, bio health care and digital will be key trends that boost exports of Korean goods," he predicted. "Vehicle sales, for which demand was reduced this year due to lockdowns, are recovering while industrial products like petrochemicals, machinery and steel are set to improve as well.”

KITA estimates that Korea’s exports will drop 6.4 percent this year compared to the previous year to reach $507.7 billion.

Growth in 2021 could make up for the losses in 2020, Kim said, but the structural change in Korea’s exports is the most important thing to be noted.

“Looking at the figures, you may think we’re just going back to 2019, but we're not,” he said. “The global economy is going through structural change — and that’s the fact that Covid-19 has accelerated digitalization and spread environmental awareness.

“A hopeful sign is that Korea’s recovery in exports recently is led by semiconductors, computers, eco-friendly vehicles and bio pharmaceuticals. This is proof that Korea has the fundamentals to keep that growth next year.”

Despite the pandemic, Korea’s exports improved a lot in this year’s second half, according to KITA data. Monthly exports have seen on-year increases since September after six months of declines.

Notable growth was seen in electric vehicles, for which exports jumped 23.7 percent on year between January and October, and bio health care exports, which grew 45.7 percent in the same period.

As for 2021, KITA said home electronics and mobile devices would be the only two categories among Korea’s 15 biggest exports to see negative growth. Exports of all other categories are projected to grow.

Computer exports were projected to increase 54.7 percent on year thanks to the digitalization wave. Vehicle exports, which were sluggish this year, would come back on track to increase by 11.9 percent. Increased consumption of disposable packages and improving crude oil prices will help expand petrochemical exports by 11.4 percent.

Regarding the trade environment for 2021, Kim said protectionism will likely persist worldwide as governments struggle to revive economies hit by the coronavirus. That includes the United States under President-elect Joe Biden, he added.

“We won’t be able to know their direction before the administration starts,” Kim said. “Biden would likely be more cooperative with other countries than Trump, but at the end, the U.S. economy would be a priority before considering partnerships.”

Kim said that the new U.S. administration was unlikely to reverse sanctions on China’s Huawei.

The biggest difficulty for KITA currently, Kim said, was dealing with quarantines that make it extremely difficult for businessmen to secure new deals.

“The government seems to be very cautious about allowing fast-track entrance for traveling businessmen, especially when it comes to choosing which countries have the most trade volume with Korea,” Kim said.

“But over the past year we developed a lot of new ways to take trade shows online, like sending samples to clients first and holding introductions virtually. The outcomes are increasing.”