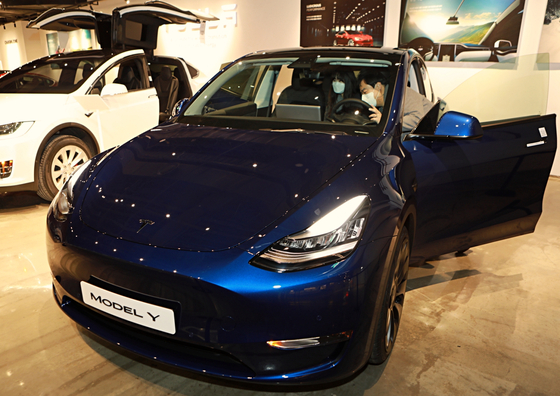 
Tesla is the most owned foreign stock in Korea.

According to data from the Korea Securities Depository on Monday, it was holding $10.34 billion worth of Tesla shares as of Jan. 22. It is the largest amount for a single foreign company. Apple is No. 2.

All foreign shares purchased through brokerages are kept at the state-run depository for safekeeping and efficient management, meaning the deposited amount reflects all holdings by local retail investors and most institutional investors.

The boost was largely due to an increase in the U.S. carmaker's share price and buying by Korean investors.

Korean investors net bought $778.9 million worth of Tesla shares just this year. About 22.7 percent of Korean investment into foreign stocks this year was focused on this car company.

According to an analyst report by Park Hyun-jee of Yuanta Securities, while the coronavirus pandemic has greatly dragged down sales of cars globally, EV sales grew compared to the previous year.

"Tesla has set a one-million-unit car sales target this year," Park wrote in the report.

While Tesla is set to announce its fourth-quarter earnings Wednesday, Lee Kyoung-min, an analyst at Daishin Securities said, "We expect the EV maker, which is a typical high-multiple stock and is a key beneficiary of the Biden administration's eco-friendly policies, to report over $10 billion in revenue and $1 in earnings per share for the fourth quarter of 2020, likely its best-ever results."

Stock clearing fees cut to zero through the end of 2020