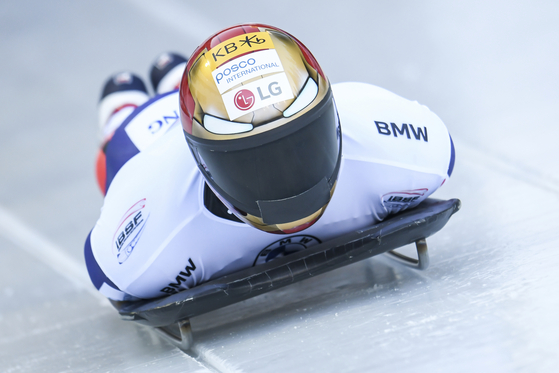 
Skeleton racer Yun Sung-bin has started 2021 strong, winning silver at his second race of the year on Friday in Königssee, Germany.

Yun, known as Iron Man for his distinctive helmet, finished in second place at the International Bobsleigh & Skeleton Federation (IBSF) World Cup event with a total time of one minute and 39.92 seconds, 0.04 seconds behind Alexander Gassner of Germany.

Yun led after the first run, 0.01 seconds ahead of Gassner, but slipped back to third on the second run, finishing second overall. Gassner finished a close second on both runs to take first place.

Yun got off to a strong start for the 2020-21 season, picking up a bronze medal one week earlier at another World Cup event in St. Moritz, Switzerland. Yun finished that race with a total time of two minutes and 17.32 seconds, 0.47 seconds behind Gassner, who also won that race.

Friday's silver medal in Germany was the 15th of Yun's career. Yun now has a total of 10 gold, 15 silver and 12 bronze medals throughout his career.

The Korean skeleton racer skipped the early contests of the 2020-21 season and has taken a knock in the standings as a result. Yun, who was the first Asian ever to win gold in a sliding sport at the 2018 PyeongChang Olympics, is currently ranked 18th with 410 points. The top sliders in the standing, all based in Europe where the majority of contests take place, have well over 1,000 points.

There are a total of nine events in the 2020-21 ISBF World Cup, with Friday's race in Königssee the seventh. Yun skipped the first five of the season, in Sigulda, Latvia, Innsbruck, Austria and Winterberg, Germany.

Yun will be back in action on Jan. 29 as the World Cup moves to Innsbruck.