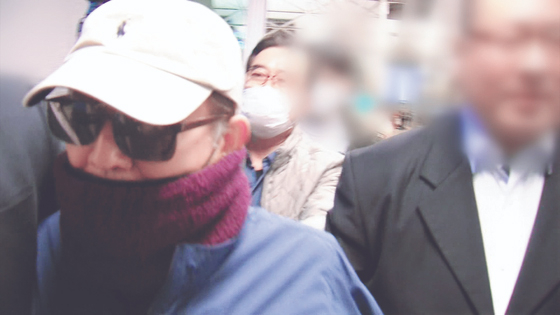 Former Justice Minister Kim Hak-eui is escorted by authorities after being stopped from boarding a plane to flee the country in March 2019. A whistleblower claims the travel ban was issued on illegal grounds. [JTBC SCREEN CAPTURE]

The Anticorruption and Civil Rights Commission on Tuesday said it was planning to request the recently launched Corruption Investigation Office for High-ranking Officials (CIO) to look into suspicions that the Ministry of Justice and a Supreme Prosecutors’ Office's fact-finding team had illegally banned Kim, who briefly served as vice minister of justice in the Park Geun-hye administration, from leaving the country on March 23, 2019.

Justice Minister nominee Park Beom-gye at his confirmation hearing on Monday also advocated turning over the case to the new agency, suggesting the state prosecution service was unlikely to probe the case objectively.

The case of Kim, a former senior prosecutor who resigned six days after becoming vice justice minister in March 2013 due to a sex scandal, has been cited by advocates of prosecutorial reform as a vivid example of the state prosecution’s tendencies to tread lightly in cases concerning their own members.

Despite the existence of a video allegedly depicting him in a sexual act, Kim was cleared twice by prosecutors in 2013 and 2014 on accusations he received sexual favors and bribes from businessmen from 2006 to 2009. On March 18, 2019, President Moon Jae-in ordered a reinvestigation, and the fact-finding team of the Supreme Prosecutors’ Office started the third probe.

Kim tried to flee from the country on March 23, 2019, using a boarding pass to Thailand, but was stopped by immigration officers from boarding the plane.

He was later convicted by the Seoul High Court in October 2020 on one bribery charge and sentenced to two years and six months in prison.

But a whistleblower recently filed a complaint alleging the travel ban that stopped Kim from leaving was not issued on legal grounds, as Kim was not technically a criminal suspect in any investigation when the request was made. The Justice Ministry also illegally accessed Kim’s travel records and conducted illegal surveillance on him, the whistleblower claimed.

Taking the allegation as a chance to attack the Moon administration and its prosecutorial reform drive, the conservative opposition called for a special counsel investigation on the Justice Ministry and prosecutors involved in the case.

The anticorruption commission on Tuesday revealed it filed for protection for the whistleblower who first raised the suspicions, and said it was seeking to file a probe request to the CIO as soon as its own internal inquiry into the matter was complete.

The CIO, however, is far from ready to take on such a task, having only a single employee on its payroll — its chief Kim Jin-wook.

Kim Jin-wook was appointed the inaugural head of the new body last Thursday and has yet to select his deputy, as well as 23 other prosecutors, all of which have to be vetted by a bipartisan panel. In addition, the organization needs to staff 40 other non-prosecutor investigators and over a dozen auxiliary staff members.

This means the earliest the new agency can take up such an investigation would be in March, and the case would be up in the air until then. In the meantime, should the case be taken out of prosecutorial hands, suspects in the case could have plenty of time to prepare for an upcoming probe.

Refrain from the command (KOR)

Sins of the past