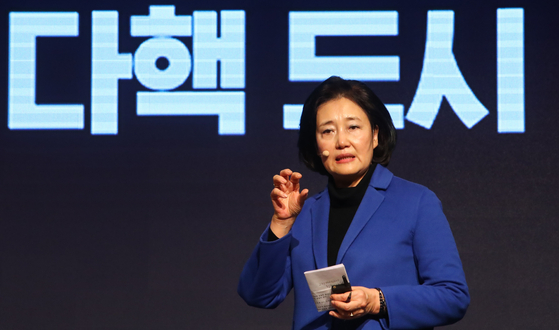 Former SMEs and Startups Minister Park Young-sun speaks during an online media event to announce her bid to run in the Seoul mayoral by-election as a ruling Democratic Party candidate. [YONHAP]


Former Minister of SMEs and Startups Park Young-sun confirmed a run in the Seoul mayoral by-election on Tuesday, the second for the ruling Democratic Party (DP).

For the April 7 mayoral by-elections in both Seoul and Busan, the DP said it will accept applications from candidates until Friday and decide next month whether it will hold primaries or not. If a primary is called, candidates will campaign from Feb. 9 to 25. The primaries will consist of both votes by party members and the results of public opinion polls, and the outcomes will be announced on March 1.

Park, who served as minister of SMEs in the Moon Jae-in cabinet from April 2019 until she stepped down last week, held a videoconference media session on Tuesday morning to announce her platform. She said she will transform Seoul into a global leader in the digital economy.

Park said she wants to transform Seoul into a so-called "21-minute compact city" by decentralizing the country's capital into 21 modules. Each module will have about a 500,000 population, and all infrastructure such as workplaces, education, childcare, health care, medical, shopping, leisure and cultural facilities will be located within 21 minutes of each another in the module.

As Park held her media event, Woo, who declared his bid in December, said he looks forward to the race.

Meanwhile, the main opposition People Power Party (PPP) laid out its campaign schedule on Tuesday. It said its primaries will be two-round competitions. The first round will be held on Feb. 5 to narrow down the candidates to four each for Seoul and Busan. The final round will be held in March.

According to the PPP's nomination committee, 14 candidates applied to run for Seoul mayor and nine for Busan mayor. After disqualifications, eight contenders will run in the first round of the Seoul mayoral primary and six in Busan.

The PPP's primaries will be based on public opinion polls open to anyone, not just PPP members. The polls will take place on March 2 and 3, and the final candidates will be announced on March 4.

The PPP's Seoul mayoral contender, whomever it will be, will likely face off against Ahn Cheol-soo of the People's Party before the April 7 by-election to unite conservative votes. Ahn wanted to run in the PPP but refused to join the party.

How the PPP and Ahn decide to proceed is unknown, but it is crucial for the conservative opposition to field a single candidate to win against the ruling DP.

Youth organizations of the PPP and the People's Party on Tuesday issued a joint statement urging their leaders to consolidate the candidacy as soon as possible. They said the opposition is destined to lose if both a PPP candidate and Ahn run against a DP rival in a three-way race.

Lawmakers from the PPP and Ahn's People's Party agreed. A joint research group of the two parties' lawmakers known as the People's Future Forum said the two parties must unite on campaign pledges as well.

The group is comprised of about 20 lawmakers from the two parties who are known as policymakers. The forum's co-chairs — Rep. Hwangbo Seung-hee of the PPP and Rep. Kwon Eun-hee of the People's Party — had lunch with Ahn on Monday and proposed that the two parties work together on a platform. Ahn reportedly agreed with the idea.